Question 1 Name the largest artery in our body?

Question 2 What is the meaning of double circulation?

Question 3 Explain the double circulation of blood in human heart?

Question 4 Describe the structure and function of human heart?

Question 5 What is cardiac cycle?

Question 8 What is blood pressure? 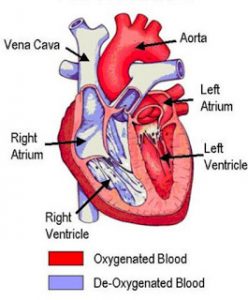 (1) It is a muscular organ, big as our fist, reddish brown in colour, situated between the 2 lungs in middle of thoracic cavity, surrounded by 2 layered sac.

(2) It has different chambers to prevent the oxygen rich blood from mixing with blood containing carbon dioxide.

(4) There are valves between left atrium and left ventricle and between right ventricle.These valves provide one-way passage and prevent return of blood.

(5) The valves of heart are made up of cardiac muscles. 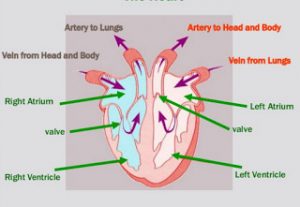 The sequence of events which take place during the completion of one heart beat is called cardiac cycle.

It involves repeated rhythmic contraction and relaxation of heart muscles.

(1) Oxygen rich blood from the lungs enter the left atrium. The left atrium relaxes when it is collecting the blood. Then it contracts while next chamber i.e. left ventricle expands so that blood is transferred to it.

(3) The de-oxygenated blood from various parts of the body is poured into right atrium through large veins called vena cava.

(4) As the right atrium contracts, the corresponding right ventricle expands and blood through tricuspid valve gets collected. It then pumps it to the lungs for oxygenation by pulmonary arteries. In the lungs this blood become oxygenated and return to the heart by pulmonary veins.

The force that blood exerts against the walls of a vessel is called Blood pressure.

It is measured by Sphymamometer.

The pressure of blood inside artery during ventricular contraction is called Systolic pressure.

The pressure of blood inside artery during ventricular relaxation is called Diastolic pressure.