Question 1 How does spore formation take place in Rhizopus?

Question 2 Explain the structure of new plant on moist bread ? 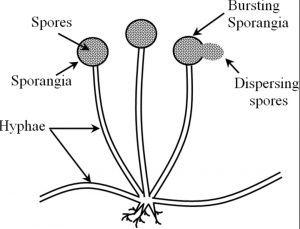 The parent plant produces hundreds of reproductive units called spores. When the spore case of plant burst then the spores spread into air. Under favourable conditions they germinate and produce new plant.

If we keep a moist slice of bread aside for few days, then the spores of bread mould plant present in air settle on moist bread and germinate to form new plant. It look like white cottony mass covering bread slice which later turns black.

These spores are sexual reproductive units which can produce more bread mould plants.

This method is used by unicellular as well multicellular organism.