You are here: Home / Class 10 / How do organism Reproduce / Sexual Reproduction in Flowering Plants

Question 1 What are angiosperm?

Question 4 Mention the reproductive parts of a flower?

Question 5 What is pollination?

Question 7 What are unisexual flowers.Give example?

Question 8 What are bisexual flowers.Give example?

Question 10 Explain the formation of seed and fruit?

Question 11 What is self pollination?

Question 13 Name the 3 parts of carpel? 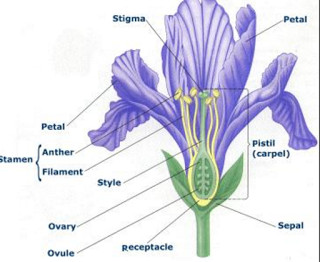 The plants in which the sex organs are carried within the flower and seeds are enclosed in a fruit called angiosperms.

The sex organs of plants are in its flowers. Majority of plants are bisexual having male and female reproductive organ in same plant.

The female organ of flower called carpel makes female gamete.These gametes are present in ovules are called ova or egg.

The main parts of plant are Receptacle,Sepals,petals,Stamen,Carpel.

The base of flower to which all the parts of a flower are attached is called receptacle.

The green leaf like part in the outer circle of flower are called sepals.The function of sepals is to protect the flower in its initial stage when it is in the form of a bud.

The colourful parts of a flower are called petals.

All the petals taken together are called corolla.The petals are usually scented.

The little stalks with swollen tops just inside the ring of petals in a flower are called Stamens.

The flower which contain only one sex organ either stamen or carpel are called unisexual flower.
For Example : Papaya,Watermelon.

The flower which has both sex organs are called bisexual flowers.
For Example : Rose,mustard

The transfer of pollen grains from anther of stamen to stigma of carpel is called pollination.
It is done by insects,birds,wind,water

When pollen grains from anther of a flower are transferred to stigma of same flower or another flower on same plant is called self-pollination.

When pollen grains from anther of a flower on one plant are transferred to stigma of flower on another similar plant is called cross-pollination.

Formation of Fruit and Seeds

1) The zygote divide several times to form an embryo within the ovule.
2) The ovule develops a tough coat around it and gradually converted into a seed.
3) The ovary grows rapidly and ripens to form a fruit(with seed inside it)
4) The other part of flower like sepals,petals,stamen,stigma,style dry up and fall off.
5) The place on plant where we had flower,we now have a fruit.A fruit protect the seed.
6) The seed contain a baby plant.
7) The part of baby in seed which develops into shoot is called plumule and part which develops into root is called radicle.

The part of seed which contain stored food for baby plant is called cotyledon.

The baby plant present inside a seed is in an inactive form,but when it gets suitable conditions to germinate it forms new plant out of seed.