Question 1 What is fission?

Question 3 What is multiple fission?

Many single celled organism like protozoa and bacteria just split into two identical halves during cell division,leading to the creation of new organism.
For Ex:Amoeba,paramecium, leishmania.

The parent organism split or divide to form 2 new organism.

Amoeba: When the amoeba cell has reached its maximum size of growth,then first the nucleus of amoeba lengthens and divides into two parts.After that cytoplasm of amoeba divides into two parts,one part around each nucleus.In this way,one parent amoeba divides to form smaller amoebae.The splitting of parent cell during fission can take place in any plane. 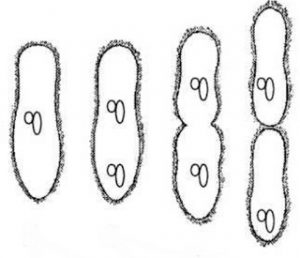 Leishmania(Parasite): It causes disease called kala-azar.In leishmania,splitting of parent cell during fission take place in a definite plane(longitudinally) with respect to flagellum at its ends.

The parent organism split to produce many new organism at same time For Ex:Malarial Parasite (Plasmodium)