Question 2 What are ovaries?

Question 3 Name the female gametes in human being? 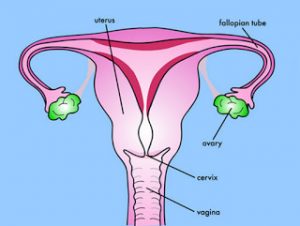 They are oval shaped organ, inside abdominal cavity. There are 2 ovaries, makes egg or ova and sex hormones, composed of thousand of follicles. At puberty these follicles mature to form ripe egg.

Above the ovaries, not connected directly to ovaries but have funnel shaped opening which almost cover ovaries.

The egg released by an ovary goes into oviduct through funnel shaped opening. Fertilisation take place in oviduct.

The two oviducts connect to a bag like organ called uterus. The growth and development of fertilised egg take place in uterus.

Uterus is connected through a narrow opening called cervix to another tube called vagina.