Question 2 Name the theories put forward for the origin of life?

Fundamental characteristics of living organism are:

Life as the inherent capacity of living organisms to utilise the outside materials (light, water, gases or food) for energy, growth and reproduction through chemical reactions (metabolism) in a controlled manner.

Formation of our Solar System

According to Big Bang Theory, some 15 billion years ago, the universe originated by a big bang (thermonuclear explosion) of a dense entity. This big explosion threw out numerous pieces of cosmic material (nebulae) which slowly condensed and became organized slowly into groups of stars called galaxies. These galaxies appear to be moving away from one another at a speed nearly equal to the speed of light. Our galaxy is called Akash Ganga or The Milky Way. Sun is one of the millions of stars of our galaxy.

Our solar system was formed about 4-5 billion (4500 million) years ago from a huge, spinning cloud of cosmic dust and gas called solar nebula. As this cloud condensed, the rotational movement threw a ring of cloud which kept on rotating around the central mass. The whole matter condensed under the force of its own gravity to become a flattened spinning disc of atoms and dust particles. The central mass condensed further and formed the sun. As the sun condensed, it became hotter and brighter due to conversion of gravitational energy into heat. Atoms and dust particles orbiting around the central mass, i.e., sun then aggregated into clumps (about the size of asteroids). These clumps finally swept up more particles and grew into different sized planets. The latter kept revolving round the sun in different elliptical orbits.

Theories on the origin of Life

(1) Theory of special creation: It stated that life was created by the wishes of a divine being or some supernatural power, the Creator or God out of nothing at a particular time in the remote past. God created the universe, plants, animals and human beings in six natural days. Adam and Eve were the first man and woman created by God. According to Hindu mythology, Lord Brahma created the world with his wish. Manu and Shradha were the first man and woman respectively. The theory of special creation is purely a religious concept. It is not based on scientific facts

(2) Theory of spontaneous generation: It stated that life originated spontaneously from non-living materials-abiogenesis. Fly larvae were believed to develop from rotten meat; frogs, snakes and crocodiles could form from the moist soil (mud) of the river. Louis Pasteur (1862) who experimentally proved that microorganisms, such as protists and bacteria, arise from the pre-existing microorganisms of their kind. Since then, it is being widely accepted that life originates from pre-existing life-biogenesis.

(3) Cosmozoic or interplanetary theory: life could have originated once or several times in various parts of the galaxy in universe and it reached the barren earth from some other heavenly body in the form of resistant spores or seeds. The latter grew and then evolved into various existing forms. This theory is also called theory of panspermia.

Because of hazards like low temperatures, very high influx of cosmic and UV radiation, lack of atmosphere, extreme dryness etc, that exist in the interplanetary space and are not conducive to life, this theory of origin of life was rejected

(4) Abiogenic or naturalistic theory or chemical origin of life: Life originated from inanimate matter by a series of chemical reactions on the primitive earth. This concept was put forward by Alexander. I. Oparin (1923) and J.B.S. Haldane (1928).

J.B.S. Haldane, a british scientist suggested in 1929 that life must have arisen on the primitive earth from a collection of chemicals through a progressive series of chemical reactions in which atoms combined into inorganic molecules, inorganic molecules into simple organic compounds, simple organic compounds into complex organic compounds (polymers), and polymers into aggregates, which finally got organized into the living matter. This primary abiogenesis is thought to have occurred about 3.6 billion (3600 million) years ago. The atmosphere was highly reducing and oxygen in molecular form was not available. 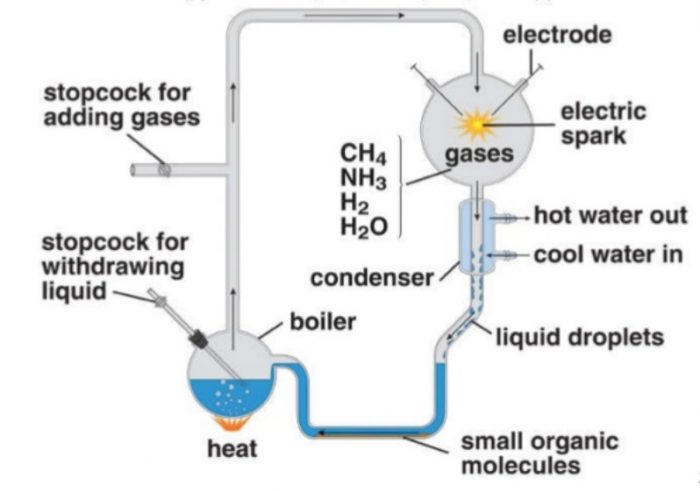 (1) They designed a glass apparatus and simulated the conditions that thought to have existed on primitive earth.

(3) These gases were believed to prevail in the primitive earth. The mixture was maintained at a temperature just below 100°C.

(4) They provided energy for interaction in the form of electric sparks in the gas flask. At the end of a week, 15% of the carbon (from methane) had been converted to simple organic compounds such as amino acids, simple sugars, purines and pyrimidines

(5) These simple organic compounds interacted in oceans to form complex organic polymers such as polysaccharides, polypeptides and proteins, lipids, nucleotides and nucleic acids. These polymers, due to intermolecular interactions, formed large colloidal aggregates called coacervates. These coacervates later organized into the living matter.

Life originally arose from the inorganic molecules of the primitive earth (abiogenesis), but on today’s earth life comes only from the pre-existing life (biogenesis).