Question 2 Why Mendel selected garden pea plant for his experiments?

Question 5 Explain the contribution of Mendel in Genetics?

Question 10 What precautions were taken by Mendel during his monohybrid and dihybrid crosses?

In asexual reproduction all the offsprings resemble each other and also to their single parent, yet very minor differences (variations) arise in them.

In most animals including human beings that reproduce sexually, offsprings do look like their parents but they are not exactly identical. Also, they do not exactly resemble each other.

Origin of life on earth around 3-6 billion years ago is believed to have originated from inanimate matter by a series of chemical reactions on the primitive earth. The earlier simple living forms evolved through gradual and continuous change and gave rise to enormous diversity of microorganisms, algae, fungi, plants and animals on this earth.

The branch of biology that deals with the changes and its causes in the diversity of living organisms over the period of time is called evolution.

The similarities and difference among the members of a species are not coincidental. They are received by the young ones from their parents. The hereditary information is present in the gametes (egg and sperm) which fuse to form the fertilised egg or zygote during sexual reproduction. The zygote then develops into an organism of a particular type.

Heredity : Transmission of characters (resemblances as well as variations) from parents to the offsprings, i.e. from one generation to the next is called heredity.

Variations: The differences shown by the individuals of a species, and also by the offsprings (siblings) of the same parents are referred to as variations.

Genetics :It is the study of heredity and variations.

Accumulation of Variations During Reproduction

Sexual reproduction generates even greater diversity. This is so because sexual reproduction involves two parents (father and mother) and every offspring receives some character of father and some characters of mother. Since, different offsprings receive different combination of characters of their parents (father and mother), they show distinct differences (variations) among themselves as well from their parents.

All these variations in a species do not have equal chances of surviving in the environment in which they are generated. Depending upon the nature of variations, different individuals would have different kinds of advantages.

Mendel selected garden pea plant (Pisum sativum) for series of hybridization experiments because it had the following special features:

(1) It had a short life cycle and, therefore, it was possible to study number of generations. 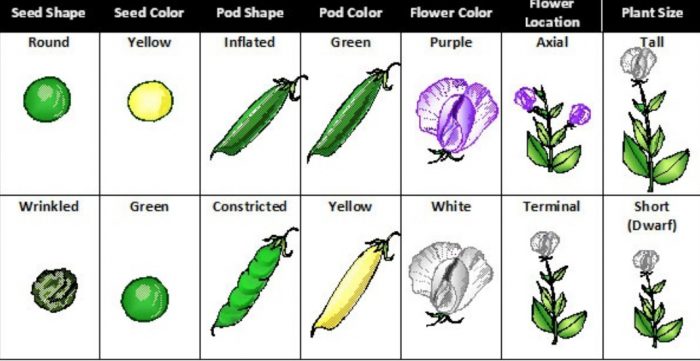 The characters which always appear in two opposing conditions are called contrasting characters.

(3) All the contrasting traits were existing in every generation because plants had bisexual flowers and normally resorted to self-pollination.

(4)In these bisexual plants, artificial cross fertilization could easily be achieved.

(5) Each pea plant produced many seeds in one generation.

(6) The garden pea plants could easily be raised, maintained and handled.

(2) Production of first generation of plants by cross breeding (hybridization)

(3)Raising of second and subsequent generations by self-fertilization of hybrids.

(1) He always focussed on the inheritance of the specific traits under consideration and simply ignored others.

In his crosses, only one trait, i.e. size of plant (tall or dwarf) or colour of flower (violet or white) etc. was considered. He called such crosses as monohybrid crosses.

(3) He avoids self-fertilization between two varieties or traits of plants.

Mendel removed the anthers (male parts) of the flowers well before the maturity of the female part, i.e., gynoecium of the flowers. Such flowers were covered to avoid entry of any foreign pollen grain from outside by wind or animals.

For making a desired cross, mature pollen grains from the anther of the flower of the desired plant were transferred on the stigma (female part) of the emasculated mature flower. The seeds formed by such crosses were collected.

A breeding experiment dealing with a single character is called a monohybrid cross.

(2)He then cross pollinated such plants having the contrasting traits, considering one trait at a time. In one such cross breeding experiment, he cross bred garden pea plant having round seeds with plant having wrinkled seeds.

(4) After the transfer of pollen grains, the cross pollinated flower was properly covered and seeds produced were allowed to mature.

(6) He raised plants from F1 seeds and allowed the flowers to self-pollinate to produce the seeds of F2 generation.

(7) In F2 generation, Mendel observed the appearance of both round and wrinkled seeds in approximately 3: 1 proportion. 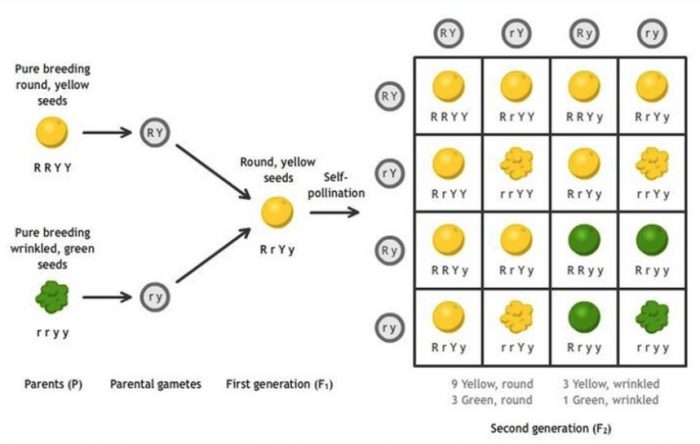 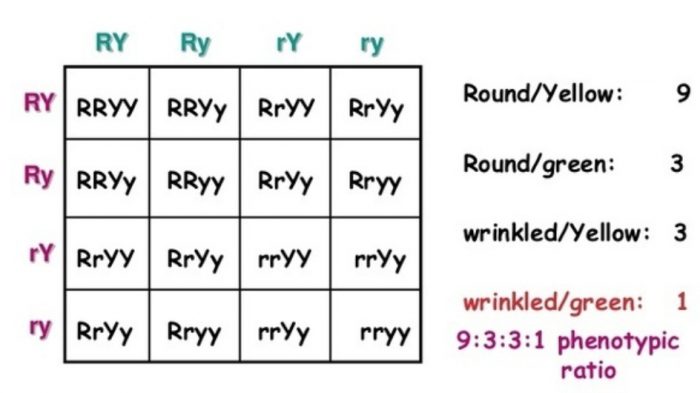 A breeding experiment dealing with two characters at the same time is called a dihybrid cross.

(1) Mendel considered shape as well as colour of the seeds simultaneously.

(2) He selected pure line plants and then cross pollinated flowers raised from seeds of round shape and yellow colour with those from wrinkled seeds and green colour.

(3) Mendel observed that in F1 generation all seeds had the features of only one parental type, i.e. round shape and yellow colour.

(4) He raised plants from F1 generation seeds and allowed the flowers to self pollinate to produce the seeds of F2 generation.

(1) In a monohybrid cross, only one of two contrasting characters (traits) appeared in F1 generation.In F2 generation, both the parental traits appeared in certain proportion.

(2) In a dihybrid cross, when two contrasting pairs of traits were considered simultaneously, only one parental combination appeared in F1 generation. However, in F2 generation, raised by self-pollination, four combinations of traits appeared. These included two parental type traits and two new combinations in approximately same proportion.

(1) There are a pair of unit factors controlling each character in pea plant, one inherited from each parent. Mendel considered these factors as the carriers of hereditary information from one generation to another. At the time of reproduction, when gametes are formed, these factors segregate so that each gamete receives only one factor of each character. This is called law of segregation.

(3) The characters are not lost even when they are not expressed.

(4) When F1 offsprings were allowed to be self pollinated, both the parental traits were expressed in definite proportion in F2 generation.