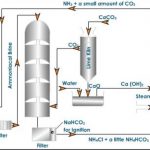 Sodium carbonate commonly known as washing soda is manufactured by Solvay – ammonia process. Principle: The process is based upon the principle that when carbon dioxide is passed through brine solution saturated with ammonia, the following ions are present in the solution. Na+ , NH4+ , Cl‾ , HCO3‾ Sodium bicarbonate being sparingly soluble, crystallizes out. This … END_OF_DOCUMENT_TOKEN_TO_BE_REPLACED 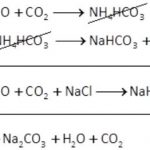