Question 1 What would have happened in South Africa of the black majority had decided to take revenge on the whites for all their oppression and exploitation?

Answer If the blacks had not forgiven the whites for all their oppression and exploitation and decided to take revenge upon them, there would have been bloodshed everywhere. It could have led to a division of the country and we would not have seen a united and peaceful South Africa that exists now. Fortunately, the black community followed the policy of non-violence in their freedom struggle.

(i) Make a poster on the life and struggle of Nelson Mandela.

(ii) If available, read some portions of his auto-biography, The Long Walk to Freedom, in the classroom.

2) He is a militant anti-apartheid activist and co-founder of ‘Umkhonto We Sizwe’ the armed wing of the African National Congress (ANC).

4) He released on 11th February, 1990 and led the party in the multi-party negotiations that led to the country’s first multi-racial elections.

6) In South Africa, Mandela is often known as Madiba.

1) In is an auto-biographical work written by Nelson Mandela. It was published in 1995.

2) The book profiles his early life coming of age, education and 27 year in prison.

Question 1 The image Raptures the spirit at South Africa today. South Africans call themselves a ʼrainbow nation’. Can you guess why? 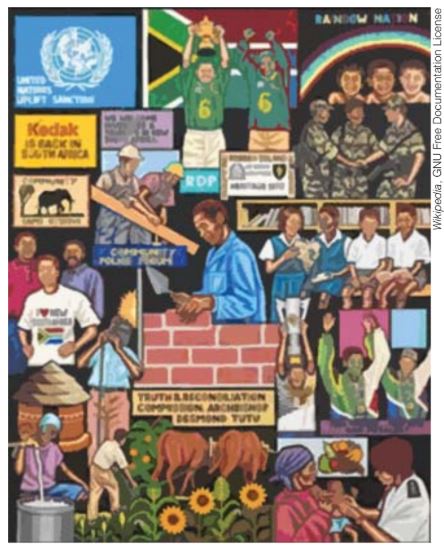 Answer South Africans call themselves a ‘rainbow nation’. Because there are Whites, Black, Coloured people and Indians in South Africa who have different skin colours. But they are living and working together as one people unified like the colours of a rainbow. They have forgotten the racist brutal, repressive past. Now the transformation of South Africa is truly

shared by all its people.

Question 2 Does the story of South African struggle for freedom remind you of the Indian national movement?

a) Relationship between different communities

b) Nature of colonialism

Answer Yes, the story of South African struggle for freedom reminds me of the Indian National Movement.

4. Party that led the struggle ANC/INC

Question 1 This is not fair! What was the point in having a Constituent Assembly in India if all the basics were already decided?

Question 1 Read the information about the makers of the Indian Constitution given in the side columns here. You don’t need to memorise this information. Just give examples from these to support the following statements
1. The Assembly had many members who were not with the Congress.
2. The Assembly represented members from different social groups.
3. Members of the Assembly believed in different ideologies.

(i) Can you identify one idea that is common to all these three quotations?

Answer The one idea that is common to all these three quotations Is the ending of inequality in Indian society.

(ii) What are the differences in their ways of expressing that common idea?

Answer  In the first quotation, Gandhiji strived for an India in which there should be no higher or lower class of people and all communities should live in perfect harmony.

In the second quotation, BR Ambedkar said,”We are going to enter a life of contradictions. In politics, we will have equality but in social and economic life, we will have inequality.’

In the third quotation, Jawaharlal Nehru said about the ending of inequality, “the service of India means the ending of poverty, ignorance, disease and inequality of opportunity.”

Question 1 Compare the Preambles to the Constitutions of the United States of America, India and South Africa.

(i) Make a list of ideas that are common to all these three.

(b) In all these three, the idea of justice is embodied.

(ii) Note down at least one of the major differences among them.

In the Preamble to the Constitution of the United States, there is a statement for the formation of union, which is not there in the Preambles to the Indian and South African Constitutions.

(iii) Which of the three makes a reference to the past?

The Preamble to the Constitution of South Africa makes a reference to the past.

(iv) Which of these does not invoke God?

Answer The Preamble to the Constitutions of the United States and India do not invoke God. Both the Preamble suggest that Citizens have complete freedom to follow any religion. There is no official religion.

Question 1 Here are some false statements. Identify the mistake in each case and rewrite these correctly based on what you have read in this chapter.

(a) Leaders of the freedom movement had an open mind about whether the country should be democratic or not after independence.

(c) A country that has a Constitution must be a democracy.

(d) Constitution cannot be amended because it is the supreme law of a country.

(a) Leaders of the freedom movement were clear in their mind that the country should democratic after independence.

(c) A country that is a democracy must have a Constitution.

(d) The Constitution needs to be amended because it has to be in accordance with people’s aspirations and changes in society.

Question 2 Which of these was the most salient underlying conflict in the making of a democratic Constitution in South Africa?

(a) Between South Africa and its neighbours

(b) Between men and women

(c) Between the white majority and the black minority

(d) Between the coloured minority and the black majority

Answer (d) Between the coloured minority and the black majority

Question 3. Which of these is a provision that a democratic Constitution does not have?

(a) Powers of the head of the state

(b) Name of the head of the state

(c) Powers of the legislature

(d) Name of the country

Answer (b) Name of the head of the state

Question 4. Match the following leaders with their roles in the making of the Constitution

(a) Why did Nehru use the expression “not wholly or in full measure” in the first sentence?

(b) What pledge did he want the makers of the Indian Constitution to take?

(c) “The ambition of the greatest man of our generation has been to wipe every tear from every eye”. Who was he referring to?

Answer (a) Pt. Nehru used the expression ‘not wholly or in full measure’ because the pledge that they had taken was yet to be fulfilled, it was yet to be completed but not all at once but substantially and gradually.

(b) Pt Nehru wanted the makers of the Constitution to take the pledge of dedication to the service of the nation and her people and to the still  larger cause of humanity.

Question 6. Here are some of the guiding values of the Constitution and their meaning. Rewrite them by matching them correctly.

Question 7 A friend from Nepal has written you a letter describing the politics situation there. Many political parties are opposing the rule of the king. Some of them say that the existing Constitution given by the monarch can be amended to allow more powers to elected representatives. Others are demanding a new Constituent Assembly to write a Republican Constitution. Reply to your friend giving your opinions on the subject.

As per your letter, there are two groups in Nepal. One group wants the monarchy to continue but his powers to be curtailed and is in favour of more powers to elected representatives by amending the existing Constitution. The other group wants a new Constituent Assembly to write a Republican Constitution and put an end to monarchy forever. However, in Nepal an

agreement has already been signed between the king and the alliance of seven political parties opposing the king. According to this, the form of government in Nepal will be a ‘Constitutional Monarchy’. In my opinion, the rule by the king should be ended and a fresh republican Constitution should

Question 8 Here are different opinions about what made India a democracy. How much importance would you give to each of these factors?

(b) Freedom struggle challenged the colonial exploitation and denial of different freedoms to Indians. Free India could not be anything but democratic.

(c) We were lucky to have leaders who had democratic convictions. The denial of democracy in several other newly independent countries shows the important role of these leaders.

Answer Democracy is not a gift of the British ruler.

(a) People of India had to fight a long struggle and made many sacrifices to get freedom from the British ruler. But the experience and training gained by the Indians in the working of the legislative institutions proved to be very useful for the country in setting up its own

(b) Freedom struggle against colonial exploitation contributed a lot in making India a democracy.

(c) We are really lucky to have leaders who had democratic conditions, is the most important factor in making India a democracy. Because the absence of this type of leaders made many newly independent countries undemocratic.

Question 9 Read the following extract from a conduct book for ‘married women’, published in 1912. ‘God has made the female species delicate and fragile both physically and emotionally, pitiably incapable of self-defence. They are destined thus by God to remain in male protection – of father, husband and son – all their lives. Women should, therefore, not despair, but feel obliged that they can dedicate themselves to the service of men’. Do you think the values expressed in this para reflected the values underlying our Constitution? Or does this go against the constitutional values?

(i) No, the values expressed in the above paragraph does not reflect the values underlying our Constitution.

(ii) It goes against the constitutional values because in this paragraph women are shown as unequal as weak and fragile who should serve men, whereas the Constitution provides for equality both of men and women. The Preamble of our Constitution starts with the words.

(iii) “We, the People of India” Which means both men and women. It suggests that citizens cannot be discriminated on the grounds of caste, religion and gender. So the values given in this paragraph does not reflect the values given in our Constitution.

Question 10) Read the following statements about a Constitution.Give reasons why each of these is true or not true.

(a) The authority of the rules of the Constitution is the same as that of any other law.

(b) Constitution lays down how different organs of the government will be formed.

(c) Rights of citizens and limits on the power of the government are laid down in the Constitution.

(d) A Constitution is about institutions, not about values.

(a) Not true An ordinary law is passed by Parliament and can be changed by it at its own will. On the other hand, the rules of the Constitution have greater authority as even the Parliament has to abide by them. For amending these rules, a special procedure has to be adopted.

(b) True The Constitution lays down in detail the structure power and functions of the three organs of the government i.e., executive, legislative and judiciary.

(c) True The rights of the citizens are laid down in the Constitution as fundamental rights. The powers of the government are divided between the executive, legislative and the judiciary which keep a check on each other thus there are limits on the power of the government.

(d) Not true A Constitution is the supreme law of the country. It lays down the composition powers and functions of the various institutions of government. The Constitution is guided by values which are found in the form of the Preamble. Principles and values like, equality, liberty, fraternity, brotherhood, secularism, justice, etc are included in the Preamble of our Constitution.