Question 1. What could be the reason of uneven distribution of population in India?

(b) Topography Rugged terrain and unfavourable climatic conditions are primarily responsible for sparse population in states like Rajasthan and the hill states.

(c) Hilly, dissected and rocky nature of the terrain, moderate to low rainfall, shallow and less fertile soil are responsible for lesser population.

Question 2. Study the figure 6.3 and compare it with figure 2.4 and figure 4.7. Do you find any corelation between these maps? 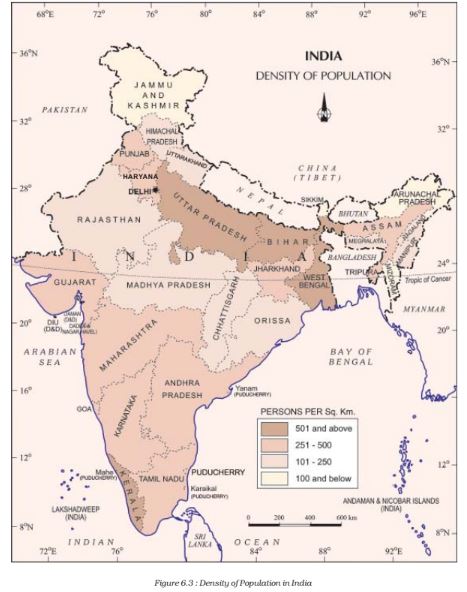 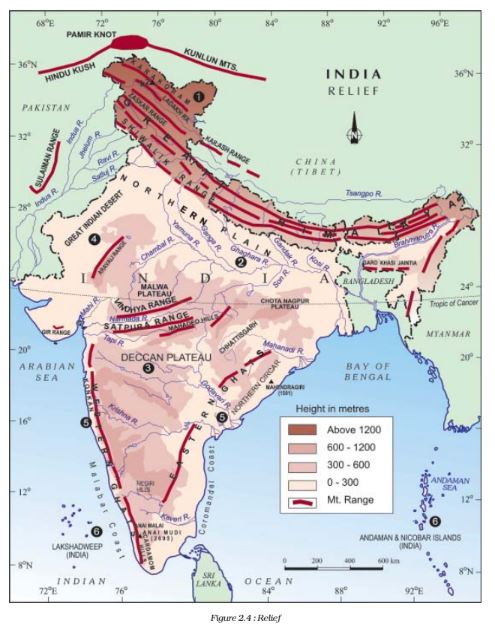 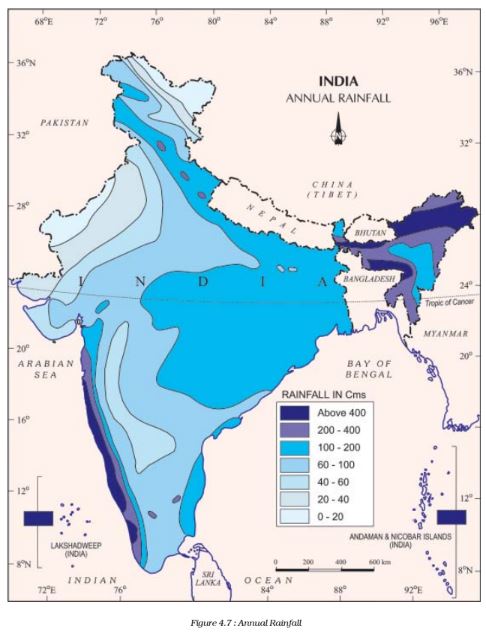 Answer Yes, these maps show that the nature of relief and amount of rainfall act as determinants of the population density in an area. The areas with high density of population (501 and above persons per sq km) are those areas which are the plains and having high rainfall. Such areas are good for agriculture and so more people live in these areas. The areas with least population (100 and below persons per sq km) are hilly areas and so mostly unsuitable for habitation.

Question 1 Table 6.1 reveals that despite the decline in growth rates, the number of people being added every decade is steadily increasing. Why?

(a) Kerala and Pondicherry have good health facilities, which reduces infant mortality.

(c) In Delhi, there is a heavy migration of males who get jobs in the metropolis. Generally, their families stay back in their villages or home towns. This leads to a very high number of males in Delhi.

(d) In Haryana, female foeticide is rampant because of people’s desire to have a male heir, due to a patriarchal family system. This has led to the skewed sex ratio in Haryana.

Question 1. Choose the right answer from the four alternatives given below

(1) Migrations change the number, distribution and composition of the population in

(a) the area of departure

(b) the area of arrival

(c) Both the area of departure and arrival

(d) None of the above

(iii) The magnitude of population growth refers to

(a) the total population of an area

(b) the number of persons added each year

(c) the number of females per thousand males

(d) the rate at which the population increases

(iv) According to the census 2001, a literate’ person is one who

(a) can read and write his/her name

(b) can read and write any language

(i) Why is the rate of population growth in India declining since 1981?

Answer Since 1981, the rate of growth started declining gradually because of popularised.

(a) Family planning measures were adopted, leading to decline in the birth rate.

(b) Awareness about advantages of small family came to be recognised.

(c) There was a growth of nuclear families occurred which adopted the small family norm.

(d) Promotion of family planning programme by the government.

The natural increase of population is the difference between birth rates and death rates.

Birth Rate Birth rate is the number of live births per thousand person in a year. It is a major component of growth, because in India birth rates have always been higher than death rates.

Death Rate Death rate is the number of deaths per thousand persons in a year. The main cause of the rate of growth of the Indian population has been the rapid decline in death rates.

Migration Migration is the movement of people across regions and territories. Migration can be internal (within the country) or international (between the countries).

Internal migration does not change the size of the population, but influences the distribution of population within the nation.

Answer
Age Structure Age structure means the number of people in different age groups in a given population.

Death Rate Death rate is the number of deaths per thousand persons in a year.

Birth Rate Birth rate is the number of live births per thousand persons in a year.

(iv) How is migration a determinant factor of population change?

(a) Migration is the movement of people across regions and territories.

(b) Migration can be internal (within the country) or international (between the countries).

(c) Migration is a determinant factor of population change, as it changes its size and composition.

(d) Internal migration does not change the size of the population but influences the distribution of population within the nation.

(e) In India, most migrations have been from rural to urban areas because of the ‘push’ factors in rural areas. These push factors are adverse conditions of poverty and unemployment in the rural areas. The ‘pull’ factors of the city are in terms of increased employment opportunities and better living conditions.

(f) These ‘push’ and ‘pull’ factors have led to increased migration from rural to urban areas and rapid rise in the urban population.

Answer The differences between population growth and population change are given in the table below:

Question 4. What is the relation between occupational structure and development?

Answer The distribution of the population according to the different types of occupations is referred to as the occupational structure.

(a) Occupations are generally classified as primary, secondary and tertiary.

(e) The proportion of people working in different activities varies in developed and developing countries.

(f) Developed nations have a high proportion of people in secondary and tertiary activities.

(h) There has been an occupational shift in favour of secondary and tertiary sectors because of growing industrialisation and urbanisation in recent times.

Question 5. What are the advantages of having a healthy population?

Answer  Health is an important component of population composition which affects the process of development. So we need a healthy population.

(a) The health of a person helps him/her to realise his/her potential and gives the ability to fight illness.

(b) A healthy person is an asset to the country, is more productive and helps in the progress of the country.

(c) A healthy person is able to earn more and improve his standard of living.

(d) A healthy population makes a healthy and strong nation economically and socially.

Question 6. What are the significant features of the National Population Policy 2000?

(b) Reducing infant mortality rate to below 30 per 1000 live births.

(g) Protection of adolescents from Sexually Transmitted Diseases (STD) and educating them about the risks of unprotected sex.