Question 1. Why are the southern slopes in Himalayan region covered with thick vegetation cover as compared to northern slopes of the same hills?

Question 2. Why have the western slopes of the Western Ghats covered with thick forests and not the eastern slopes?

Answer It is because the western slope get much heavier rainfall than the eastern slopes. Moisture laden air moves eastwards across, the Western Ghats during the monsoon season.

Question 3. Study the bar graph and answer the following questions 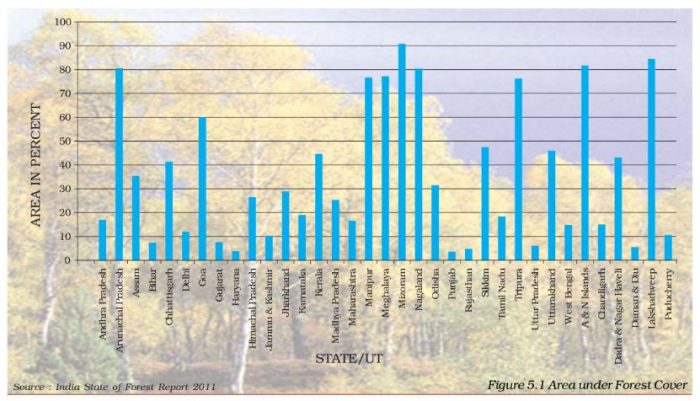 (i) Name the state having maximum area under forest cover.

(ii) Name the union territory having minimum area under forest cover and give the reason why.

(ii) Lakshadweep is the union territory having minimum forest cover. Since Lakshadweep consists only of coral islands, they have no proper soil for growing of forests except for coconut trees. Since these are commercially viable there is no declared forest in Lakshadweep.

Question 1. What will happen if plants and animals disappear from the Earth’s surface? Can human beings survive under such a situation? Why is biodiversity necessary and why should it be conserved?

(a) If the plants and animals disappear from the Earth’s surface, then the ecological balance will be disturbed. Without plants there will be no oxygen available for breathing after some time and everybody will die.

(c) Each species has its own place and role to play in the environment and help in the maintaining the ecological balance. That’s why it should be conserved.

Question 1. Identify some medicinal plants in your area. Which plants are used as medicines by local people to cure diseases?

Answer Some medicinal plants found in our area with diseases they can cure are given below :

(iv) Iswarmula Root : Decoction of root is given in constipation and abdominal colic.

(v) Dimiri Leaf and Stem : Fresh juice (50-100 mL) of leaves is given with  water for about 10 days to treat gastro intestinal problems.

(i) Find out from the above newspaper cuttings the main concern highlighted in the given news items.

Answer The main concern highlighted in the given news items is that wildlife in India is endangered and some species may get extinct soon. The rhinos, tigers, vultures and gulls are being killed by poachers or are dying.

(iii) Find out various steps taken by the Indian Government to protect them.

(a) Fourteen biosphere reserves have been established in the country in which the species are protected. It is illegal to kill any animals in them.

(b) Project Tiger, Project Rhino and Project Great Indian Bustard have been started to help protect these endangered species.

(c) Many National Parks and Wildlife Sanctuaries have been set up in various parts of the country.

(d) Many awareness programmes like release of advertisements, conduct of seminars, etc are undertaken by the Government to sensitise the general public to these issues.

(iv) Describe how you can contribute to the protection of endangered animals and birds.

(a) If we find any illegal activity like poaching, trapping, etc being carried out in our area, we should report it to the Forest Department office in the area.

(b) We can conduct awareness programmes about wildlife preservation in our locality and community for all people.

Question 1. Choose the right answer from the four alternatives given below

(i) To which one of the following types of vegetation does rubber belong to?

(iii) In which of the following states is the Simlipal Bioreserve located?

(iv) Which one of the following bioreserves of India is not included in the world network of bioreserve?

(i) Define an ecosystem.

Answer All the plants and animals in an area are interdependent and interrelated to each other in their physical environment, thus forming an ecosystem. Human beings are also an integral part of the ecosystem. They utilise the vegetation and wild life.

(ii) What factors are responsible for the distribution of plants and animals in India?

(iii) What is a bioreserve? Give two examples.

Answer A bioreserve is an area in which the flora and fauna of the given country is protected and there are certain researches which are done on them. It is an area containing a wildlife preserve bordered by a buffer zone in which more frequent use is permitted to the public, established as a way of integrating habitat conservation with the interests of the local community.

Examples are Rajaji in Uttarakhand and Simlipal in Orissa.

(iv) Name two animals having habitat in tropical and montane type of vegetation.

(i) Flora and Fauna

Difference between Flora and Fauna

Question 4. Name the different types of vegetation found in India and describe the vegetation of high altitudes?

Answer The following major types of vegetation are found in India

(a) In mountainous areas, the decrease in temperature with increasing altitude leads to a corresponding change in natural vegetation.

(b) The wet temperate type of forests are found between a height of 1000 and 2000 metres, where evergreen broad leaf trees such as oaks and chestnuts predominate.

(d) These forests cover mostly the southern slopes of the Himalayas, places having high altitudes in southern and north east India.

(f) At high altitudes, generally more than 3,600 metres above sea level, alpine vegetation is found. Silver fir, jumpers, pines and birches are the common trees of these forests.

Question 5. Quite a few species of plants and animals are endangered in India? Why?

Answer  (a) Many plants and animals in India are endangered because of the greediness of human beings for their commercial value. Humans are hunting animals for their skins, horns and hooves which are in demand and give a lot of profit.

(b) Deforestation on a wide scale destroys the habitat of animals and also leads to decline of the different species of trees and plants.Ecological balance is disturbed due to deforestation, which is harmful for both flora and fauna.

Question 6. Why has India a rich heritage of flora and fauna?

(a) It has a very large geographical area which includes the mountains, the Northern plains, plateaus and also islands.

(b) lndia has a varied climate from very dry to monsoon type and temperature ranges from very hot to cold and very cold, which is suitable for different kinds of flora and fauna.

(d) India is blessed with perenial rivers which sustain aquatic life apart from supporting different kinds of flora and fauna.

(e) The mountains and plains are capable of supporting and sustaining different kinds of plants and trees and provide an environment and habitat for various kinds of animal species.

India is one of the twelve mega biodiversity countries of the world. It has about 47,000 plant species. It stands at the tenth place in the world and fourth in Asia in plant diversity. It has 89,000 species of animals as well as a rich variety of fish. It has about 15,000 flowering plants and ferns. India is blessed with different types of soils, climatic conditions and physical features and thus, it is suitable for supporting different species of flora and fauna making it a biodiversity hot spot. 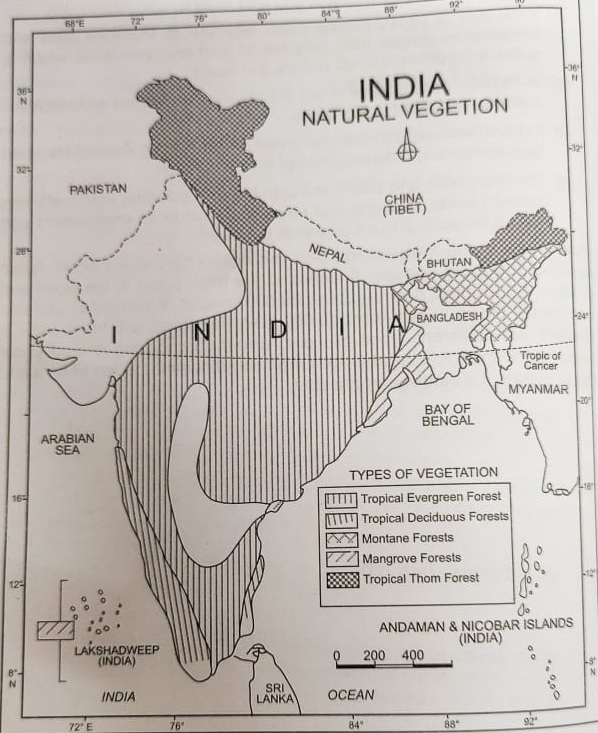 The Evergreen forests are labelled as ‘Tropical Evergreen Forest

The Dry Deciduous Forests are those parts of the forests labelled Tropical Deciduous Forests which have rainfall between 70 and 100 cm annually. They are found in the rainier part of the Peninsular plateau and the plains of Bihar and Uttar Pradesh.

(ii) Some National Parks in the four regions of India are listed below.

(i) Find some trees in your neighbourhood having medicinal values.

(iii) Write a poem or paragraph showing the importance of wild life.

(iv) Write the script of a street play giving the importance of tree plantation and try to enact it in your locality.

(v) Plant a tree either on your birthday or one of your family member’s birthday. Note the growth of the tree and notice in which season it grows faster.

(i) Some trees having medicinal values are (there are many others)

(a) Amla Plant or Indian Gooseberry: This is one of the richest sources of Vitamin C. It is a medium size deciduous plant, which attains a height of 8 to 18 meters. Amla is used to make herbal products, which helps get rid of health-related problems like hair fall, haemorrhage, leucorrhoea, skin diseases and discharge of blood from uterus.

(b) Neem Tree: It plays a significant role in Ayurvedic medicine. It helps to treat chickenpox, fever, skin disease and headache.

(c) Eucalyptus : It is a tall tree, with heights upto 100 metres. Oil taken out of the Eucalyptus leaves has great medicinal value. It helps in purifying blood and lowering of blood sugar level. It cures problems of asthma, bronchitis, cardiac problems and fungal infections.

(ii) Occupations getting following raw materials from forests and wildlife

(iii) Importance of Wildlife : Wildlife comprises of the innumerable varieties of wild plants, animals, fungi and microorganisms that exist on our planet Earth, rather than just cultivated plants and domesticated animals. We largely depend on this wildlife for every elementary requirement in our life.

The food we eat, the clothes, we wear, the medicines we consume, a variety of building materials used for construction, numerous chemicals used for manufacturing our necessities, all are extracted from the wildlife existing around us. About 40,000 species of plants, animals, fungi and microscopic animals benefit us in some way or the other. The normal functioning of the biosphere depends on endless interactions amongst animals, plants, and microorganisms.