Question 1. Find out the names of the glaciers and passes that lie in the Great Himalayas.

Passes that lie in the Great Himalayas

Question 2. Find out the name of the states where highest peaks are located.

Question 3. Find out the location of Mussoorie, Nainital, Ranikhet from your atlas and also name the state where they are located.

Answer All the three towns are in the state of Uttarakhand in the range called lesser Himalaya or Himachal.

Question 1. Choose the right answer from the four alternatives given below.
(i) A landmass bounded by sea on three sides in referred to as
(a) coast
(b) island
(c) peninsula
(d) None of these

(iii) The Western coastal strip, South of Goa is referred to as
(a) Coromandal
(b) Konkan
(c) Kannad
(d) Northern Circar

(i) What are tectonic plates?

Answer The convectional currents below the Earth’s crust split the crust into a number of pieces. These pieces are called tecton plates. e.g., Eurasia plate, Indo Australian plate etc.

(ii) Which continents of today were part of the Gondwana land?

(iii) What is the Bhabar?

Answer Bhabar is a narrow belt of land about 8 to 16 km wide and covered with pebbles deposited by the rivers and lying parallel to the slopes of the Shiwaliks.

(iv) Name the three major divisions of the Himalayas from north to south.

(v) Which plateaus lies between the Aravali and the Vindhyan ranges?

Answer Malwa plateau lies between the Aravali and the Vindhyan ranges.

(vi) Name of the Island group of India having coral Vindhyan

Question 3. Distinguish between
(i) Converging and diverging tetonic plates.

Question 4. Describe how the Himalayas were formed.

Answer (a) The oldest landmass of India (peninsular part) was a part of Gondwana land.
(b) Gondwana land included India, Australia, South Africa and South America as one single landmass.
(c) Convectional currents split the crust into a number of pieces, thereby leading to the drifting of the Indo Australian plate after being separated from the Gondwana land towards the North.
(d) The Northward drift resulted in the collision of the plate with the much larger Eurasian plate.
(e) Due to this collision the sedimentary rocks which were accumulated in the geosyncline known as the Tethys, were folded to form the mountain systems of Western Asia and Himalaya.
(f) The Himalayas represent a youthful topography with high peaks, deep valleys and fast following rivers.
Question 5. Which are the major physiographic divisions of India? Contrast the relief of the Himalayan region with that of the Peninsular plateau?
Answer The major physiographic divisions of India are
(i) The Himalayan mountains
(iii) The Peninsular plateau
(v) The Coastal plains
(ii) The Northern plains
(iv) The Indian desert
(vi) The islandsPhysical Features of IndiaContrast between the Himalayan region and the Peninsular plateau

Question 6.  Give an account of the Northern plains of India.

Answer (a) The Himalayan uplift out of the Tethys sea and subsidence of the Northern flank of the peninsular plateau resulted in the formation of a large basin. In course of time, this depression gradually got filled with deposition of sediments from rivers flowing from the mountains in the north and led to formation of the fertile Northern plains.
(b) It spreads over an area of 7 lakh sq km. The plain is about 2400 km long and 240-230 km broad.
(c) It is a densely populated and an intensively cultivated area.
(d) With its adequate water supply and favourable climate, it is agriculturally a very productive part of India.
(e) The Northern plains are broadly divided into 3 sections.
(f) The Western part of the Northern plains is called the Punjab plains, formed by the Indus and its tributaries.
g) The Ganga plain extends between the Ghaggar and the Teesta rivers, spread over the states of Haryana, Delhi, UP, Bihar and West Bengal.
h) The Brahmaputra Plain to the East of the Ganga plains lies the Brahmaputra plain covering the areas of Assam and Arunachal Pradesh.
Question 7. Write short notes on the following
(i) The Indian Desert
(ii) The Island Groups of India
(ii) The Central Highlands
Answer
(i) The Indian Desert
(a) The Indian desert lies towards the Western margin of the Aravali hills.
(b) It is an undulating sandy plain covered with sand dunes.
(c) This region receives very low rainfall, below 150 mm per year.
(d) It has arid climate with low vegetation cover.
(e) Streams appear during the rainy season. Soon they disappear into the sand as they do not have enough water to reach the sea.
(f) Luni is the only large river in this region.
(g) Barchan (Crescent shaped duners) cover the larger areas but longitudinal dunes become more prominent near the Indo-Pakistan border.
(h) The Indian desert is popularly known as the Thar desert.
(ii) The Central Highlands
(a) The Peninsular plateau consists of two broad divisions, namely the central highlands and the Deccan plateau.
(b) The part of the Peninsular plateau lying to the north of the Narmada river covering a major area of the Malwa plateau is known as the Central Highlands.
(c) They are bound by the Vindhya Range from the south and by the Aravali hills from the north-west.
(d) The further westward extension gradually merges with the sandy and rocky desert of Rajasthan.
(e) The flow of the rivers draining this region, namely the Chambal, the Sind, the Betwe and Ken is from south-west to north-east.
(f) The central highlands are wider in the west but narrower in the east.
(g) The eastward extensions of their plateau are locally known as ‘Bundelkhand’ and Baghelkhand.
(h) The Chhotanagpur plateau marks the further eastward extension drained by the Damodar river.
(iii) The Island Groups of India
India has two groups of islands namely the Lakshadweep group and the Andaman and Nicobar group.
(a) The Lakshadweep Islands Group lie close to the Malabar coast of Kerala.
1) These islands are composed of small coral islands.

2) Earlier, they were known as Laccadive, Minicoy and Amindive. In 1973, these were renamed as the Lakshadweep.
3) They cover a small area of 32 sq km.
4) Kavaratti Island is the administrative headquarters of Lakshadweep.
5) This island group has a great diversity of flora and fauna.
6) The Pitti Island, which is uninhabited, has a bird sanctuary.

(b) Andaman and Nicobar Islands

1) The elongated chain of islands located in the Bay of Bengal extending from north to south are the Andaman and Nicobar Islands.
2) They are bigger in size and more numerous and scattered than the Lakshadweep Islands.
3) The entire group of islands is divided into two broad categories, the Andaman in the north and Nicobar in the south.
4) It is believed that these islands are an elevated portion of the submarine mountains.
5) These islands are of great – strategic importance for the country.
They have great diversity of flora and fauna.
6) These islands lie close to the equator experience equatorial climate and have thick forest cover.

On an outline map of India show the following.

(i) Mountain and Hill Ranges The Karakoram, the Zaskar, the Patkai Bum, the Jaintia, the Vindhya range, the Aravali and the Cardamom hills. 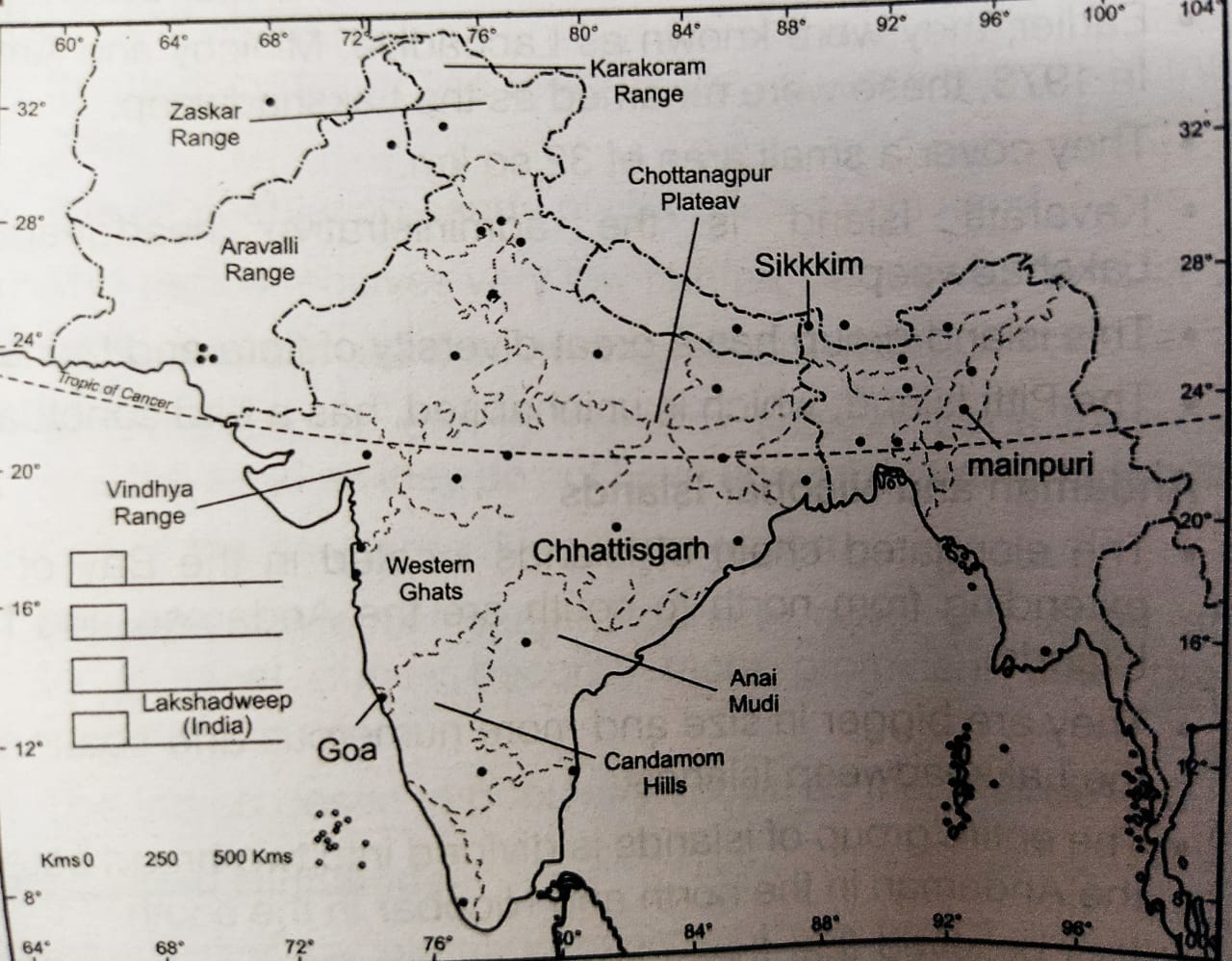 Locate the peaks, passes, ranges , plateau hills and duns hidden in the puzzle. Try to find where these features are located.You may star your search horizontally vertically or diagonally. 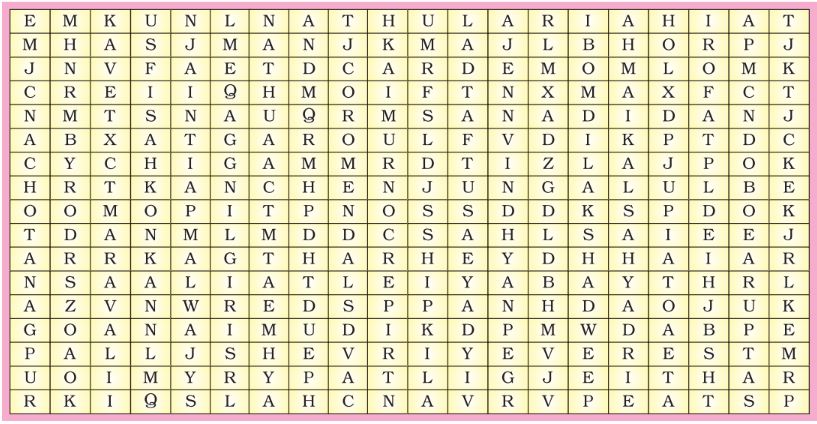