You are here: Home / NCERT Solutions / Class 9 / English / Chapter 2 The Sound of Music

Thinking about the Text

I. Answer these questions in a few words or a couple of sentences each.

(1) How old was Evelyn when she went to the Royal Academy of Music?

Answer  Evelyn was not even seventeen years old when she went to the Royal Academy of Music.

(2) When was her deafness first noticed? When was it confirmed?

Answer  When Evelyn was around eight her deafness was first noticed but was confirmed when she turned eleven.

II. Answer each of these questions in a short paragraph (30–40 words).

(1) Who helped her to continue with music? What did he do and say?

Answer Evelyn was encouraged to pursue music by Ron Forbes. He spotted her potential and said, “Don’t listen through your ears, try to sense it some other way.” He tuned two large drums to different notes.

(2) Name the various places and causes for which Evelyn performs.

Answer  Evelyn gave solo performances at regular concerts internationally. She also performed for free in prisons and hospitals. Apart from that, she accorded high priority to classes for young musicians.

(1) How does Evelyn hear music?

Answer  Evelyn became deaf when she was eleven years old. But she did not give up. She was determined to lead a normal life and pursue her interest in music. It was fascinating to watch her create beautiful pieces of music without actually being able to listen to it. She was encouraged by Ron Forbes to try to sense music without using her ears. He tuned two drums into two different notes and she indeed could feel the higher drum from her waist up and the lower tuned drum from her waist down. She learned how to open her mind and body to sounds and vibrations. Similarly, she played the xylophone. She could feel the vibration of the music from the stick into her fingertips. While performing on a wooden platform she removed her shoes to feel the vibrations from her feet, up her legs, and poured each cell of her into the music. It tingled her and the sensation helped her develop a deeper bond with music.

The Shehnai of Bismillah Khan

Thinking about the text

Answer The pungi was a ‘reeded noisemaker.’

(2) (Bismillah Khan, A barber, Ali Bux) transformed the pungi into a shehnai.

Answer A barber transformed the pungi into a shehnai.

Find the words in the text which show Ustad Bismillah Khan’s feelings about the items listed below. Then mark a tick (✓ ) in the correct column. Discuss your answers in class.

Question 3 Answer these question in 30-40 words

(1) Why did Aurangzeb ban the playing of the pungi?

Answer Pungi had a shrill and unpleasant sound and was disliked by Aurangzeb. Hence, he banned the playing of pungi.

(2) How is a shehnai different from a pungi?

Answer Shehnai is a hollow pipe made from a stem and has holes in its body. It has a better sound quality than pungi. It is longer and broader than pungi.

(3) Where was the shehnai played traditionally? How did Bismillah Khan change this?

Answer The shehnai was played traditionally in the temple at the royal courts and on the occasion of weddings. The credit must go to Bismillah Khan to take this instrument onto the classical stage.

(4) When and how did Bismillah Khan get his big break?

Answer In 1938 when All India Radio was opened in Lucknow, Bismillah Khan was invited to perform shehnai on the radio. He got his big break then and soon became an often-heard player on the radio. He became the first Indian to greet the nation with Shehnai from the Red Fort on 15th August ,1947.

(5) Where did Bismillah Khan play the shehnai on 15 August 1947? Why was the event historic?

Answer Bismillah Khan played the shehnai on 15 August 1947 at the Red Fort. He was the first Indian to greet the nation with his musical instrument. It was a historical event because India received independence on that day from the British empire.

(6) Why did Bismillah Khan refuse to start a shehnai school in the U.S.A.?

Answer He refused to start a shehnai school in the USA because he never wanted to leave India. He loved India so much and could not stay away specially from Banaras , the river Ganga and Dumraon.

(7) Find at least two instances in the text which tell you that Bismillah Khan loves India and Benaras.

Answer Bismillah Khan loved his country. He declined a student’s offer to start a shehnai school in U.S.A. since it would keep him away from his country. He also refused Shekhar Gupta’s offer to move to Pakistan during partition and was stern to never leave Banaras.

I. Look at these sentences.

• Evelyn was determined to live a normal life.

• Evelyn managed to conceal her growing deafness from friends and teachers.

The italicised parts answer the questions: “What was Evelyn determined to do?” and “What did Evelyn manage to do?” They begin with a to-verb (to live, to conceal).

Complete the following sentences. Beginning with a to-verb, try to answer the questions in brackets.

(1) The school sports team hopes to win the match.

(3) They advised the hearing-impaired child’s mother to consult a doctor.

(4) The authorities permitted us to construct the building.

(5) A musician decided to open a school for children.

From the text on Bismillah Khan, find the words and phrases that match these definitions and write them down. The number of the paragraph where you will find the words/phrases has been given for you in brackets.

(1) When something is revived, it lives again.

(2) When a government bans something, it wants it stopped.

(3) When something is considered auspicious, welcome it.

(4) When we take to something, we find it interesting.

(5) When you appreciate something, you find it good and useful.

(6) When you replicate something, you do it for the second time.

(7) When we come to terms with something, it is no longer upsetting.

We cannot say: *the overjoyed man.

Look at these entries from the Oxford Advanced Learner’s Dictionary (2005). 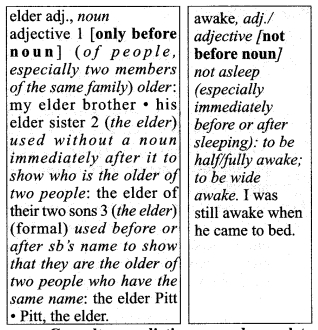 Consult your dictionary and complete the following table. The first one has been done for you.

Use these words in phrases or sentences of your own.

Some sentences using these adjectives are:

1. She is indispensable for the successful completion of the project.

2. Sunita was impressed by my singing.

4. Come to India and enjoy the great outdoors.

5. I enjoy the company of my paternal uncle.

6. Gennie was showered with countless gifts.

7. My grandmother gave me a priceless piece of advice.