Question 1 What are the advantages of using CNG and LPG as fuels?

Answer The advantages of using CNG and LPG as fuel are:

Question 2 Name the petroleum product used for surfacing of roads?

Answer Bitumen is the petroleum product used for surfacing of roads.

Question 3 Describe how coal is formed from dead vegetation. What is this process called?


Answer Coal was formed by the decomposition of large land plants and trees buried under the earth 300 million years ago. About 300 million years ago ,the earth had dense forests in low-lying wet land areas. Due to natural processes like earthquake ,volcanoes and floods etc. These forests were buried under the surface of earth. As more soil deposited over them ,they were compressed. The temperature also rose as they sank deeper and deeper. Due to high pressure and temperature inside the earth ,and in the absence of air ,the woods of buried trees was slowly converted into soil.

The slow process by which the dead plants buried deep under the earth have become coal is called Carbonisation. Since coal was formed from remains of plants therefore coal is called a fossil fuel.

Question 4 Fill in the blanks.

(b) Process of separation of different constituents from petroleum is called______ .

(a) Fossil fuels are Natural gas, Coal and Petroleum.

(b) Process of separation of different constituents from petroleum is called Refining.

(a) Fossil fuels can be made in the laboratory. (T/F)

(b) CNG is more polluting fuel than petrol. (T/F)

(d) Coal tar is a mixture of various substances. (T/F)

(a) Fossil fuels can be made in the laboratory. – False

(b) CNG is more polluting fuel than petrol. – False

(d) Coal tar is a mixture of various substances. – True

(e) Kerosene is not a fossil fuel. – False

Answer It is a tough and porous black solid substance. It is prepared by destructive distillation of coal or heating coal in the absence of air.

Question 8 Explain the process of formation of petroleum.

Question 9 The following Table shows the total power shortage in India from 1991–1997. Show the data in the form of a graph. Plot shortage percentage for the years on the Y-axis and the year on the X-axis. 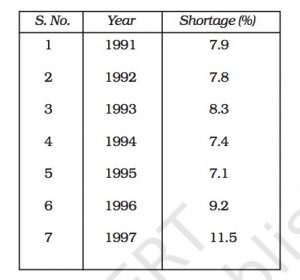 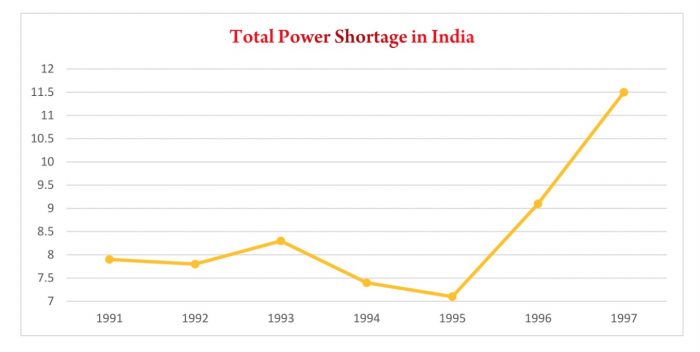