1. What is the term used for chemical secretions of endocrine glands for changes taking place in the body?

The transition period of physical and mental development which occur between childhood and adulthood is called adolescence.

The period of life of a person when the body undergoes a lot of changes leading to reproductive maturity is called Adolescence.

3. What is menstruation? Explain.

With the onset of puberty , the eggs begin to mature in the ovaries of a women.One mature egg or ovum is released by one of the ovaries once in about 28 to 30 days.During this period, the inner lining of uterus grows and become thick and spongy, and prepares itself to receive the fertilised egg.In case the fertilisation of egg cell occurs by sperm , the fertilised egg cell begins to divide to form an embryo.The embryo then gets embedded in the thick uterus lining.This results in pregnancy which ultimately leads to  the birth of a baby.

If fertilisation does not occur due to lack of sperm , then the egg released by the ovary dies within a few days and the thick lining breaks down.Since the thick uterus lining contains a lot of blood vessels, therefore , the breaking down of uterus lining produces blood along with other tissues.The blood and other tissues come out of vagina of woman in the form of a bleeding.The bleeding from the uterus which occur in a woman or mature girl every month (if the egg cell has not been fertilised) is called menstrual flow or menstruation.

4. List changes in the body that take place at puberty.

Changes which take place at puberty are:

(2) Change in Body shape and appearance

(2) Girls develop broader hips than boys.Due to this, the region below waist become wider in girls than boys.

(3) Boys develop more muscle than girls.So, the body of boys look more muscular than that of girls.

5. Prepare a Table having two columns depicting names of endocrine glands
and hormones secreted by them.

6. What are sex hormones? Why are they named so? State their function.

In male, the testes produces the male sex hormone testosterone. This hormone helps in the development and maintenance of the primary and secondary sexual characters and production of sperms.

In female, the ovaries secrete oestrogen and progesterone responsible for the primary and secondary sexual characters.

(a) Adolescents should be careful about what they eat, because
(i) proper diet develops their brains.
(ii) proper diet is needed for the rapid growth taking place in their body.
(iii) adolescents feel hungry all the time.
(iv) taste buds are well developed in teenagers.

Answer: (ii) proper diet is needed for the rapid growth taking place in their body.

The secondary sexual characteristics in males are:

(1) Hairs grow on face in the form of beard and moustache.

(4) Adam’s apple develops in front of throat in boys.

The secondary sexual characteristics in boys are produced by the male sex hormone called testosterone made in testes.

The secondary sexual characteristics in females:

(2) Hips broaden and become more curved and prominent in girls.

(3) A shrill or high pitched voice in girls.

The secondary sexual characteristics in girls are produced by the female sex hormone called estrogen made in ovaries.

The sex of a baby to be born is decided at the moment the egg cell of woman gets fertilised by the sperm of man and pregnancy occurs.The instructions for determining the sex of baby are present in the sex chromosomes which are in the nucleus of the fertilised egg called zygote.

(1) If a sperm carrying X chromosome fertilises an egg cell which carries X chromosomes , then the zygote formed will have XX combination of sex chromosomes due to which the child born will be a girl.

(2) If a sperm carrying Y chromosomes fertilises an egg cell which carries X chromosomes , then the zygote formed will have XY combination of sex chromosomes due to which the child born will be a boy.

(1) If the father contributes X sex chromosomes at fertilisation through its sperm , the baby born will be a girl.

(2) If the father contributes Y sex chromosomes at fertilisation through its sperm, the baby born will be a boy.

Father is responsible for the sex of the baby which is born.

10. The table below shows the data on likely heights of boys and girls as they
grow in age. Draw graphs showing height and age for both boys and
girls on the same graph paper. What conclusions can be drawn from
these graphs? 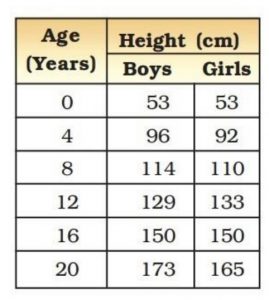 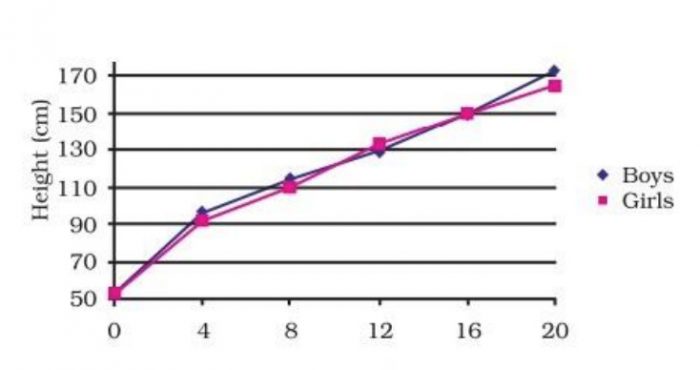 Answer:
The graph shows the relation between the age and height of both boys and girls. At the time of puberty there is a sudden increase in height of both boys and girls. On the basis of the above graph, it can be observed that during the age of 4-8 years, girls have less height as compared to boys. However, as soon as girl reach 12-13 years, their height shows a sudden increase and become more than boys. In later years, growth in both sexes becomes stable. Growth during puberty is under the control of hormones.