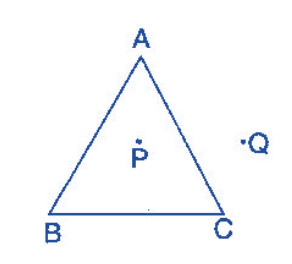 Point A lies on ΔABC.

Question 2. (a) Identify three triangles in the figure.

(b) Write the names of seven angles.

(d) Which two triangles have ∠B as common?

Answer 2 : (a) The three triangles are: ∠ABC,∠ABD,∠ADC