You are here: Home / NCERT Solutions / Class 6 / History / Chapter 3 In the Earliest Cities

Question 1 How do archaeologists know that cloth was used in the Harappan civilisation?

Answer 1 Archaeologists found that actual pieces of cloth were found attached to the lid of a silver vase and some copper objects at Mohenjodaro. They have also found spindle whorls, made of terracotta and faience. These were used to spin thread. A stone statue of an important man found at Mohenjodaro shows him wearing an embroidered garment. This shows Harappan civilisation were using cloth.

Question 3 Why were metals, writing, the wheel, and the plough important for the Harappans?

(1) Metals: They were used for making vessels and weapons. Harappan made copper tools. They also made ornaments of gold and silver.

(2) Writing: Writing was very important for the Harappans. There were scribes, people who knew how to write. Scribes helped prepare the seals and perhaps wrote on other materials that have not survived. It is important for communication.

(4) Plough: Plough was used to prepare the land for farming by the Harappans.

Question 4 Make a list of all the terracotta toys shown in the lesson. Which do you think children would have enjoyed playing with the most? 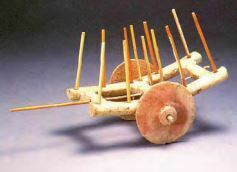 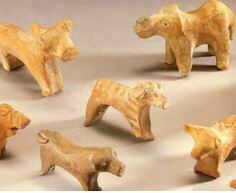 Question 5 Make a list of what the Harappans ate, and put a tick mark against the things you eat today.

The things we eat today are wheat, rice, fruits, pulses.

Question 7 Describe three important buildings in your city or village. Are they located in a special part of the settlement (e.g. the centre)? What are the activities that take place in these buildings?

Answer 7 In our city (or village) the following three important buildings are located:

(4) Temple or Mosque or Church or Gurudwara

The following activities take place in these buildings respectively:

(2) School Building. In this building, education is provided to boys and girls of our village or city.

(3) Hospital. Here ill people or patients come and consult doctors, compounders or nurses as per their diseases or requirements.

(4) Temple or Mosque or Church or Gurudwara. People come and participate in prayer (or Namaz) according to their own religion and faith. (Any three points.)

Question 8 Are there any old buildings in your locality? Find out how old they are and who looks after them.

Answer 8 Yes, there are some old buildings in our locality. These buildings are looked after by a government department. The name of this department is the Archaeological Survey of India.