Question 1. Why does a compass needle get deflected when brought near a bar magnet? 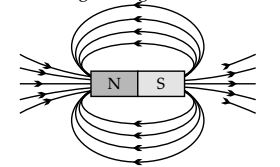 Answer 2 Properties of magnetic lines of force (also known as magnetic field lines) are listed below:

(iv) No two magnetic field lines can ever intersect with each other.

Question 3. Why don’t two magnetic field lines intersect each other?

Answer 3 The two magnetic field lines can never intersect each other because two tangents can be drawn from that point of intersection which will give two directions of the field from the same point, which is impossible.

Question 1. Consider a circular loop of wire lying in the plane of the table. Let the current pass through the loop clockwise. Apply the right-hand rule to find out the direction of the magnetic field inside and outside the loop.

In this case, consider that a circular loop of wire is lying on the plane of the table as shown. Let the current pass through the loop in the clockwise direction. On applying the right-hand thumb rule to the right side and left side of the loop: 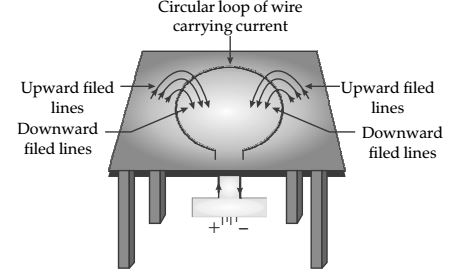 For the right side of the circular loop: The direction of magnetic field lines will be as if they are emerging from the table outside the loop and while they will be going into the table inside the loop as shown in the figure.

Similarly, for the left side of the circular loop: The direction of magnetic field lines inside the loop will also be going into the table while outside the loop they will be emerging from the table as shown.

Question 2. The magnetic field in a given region is uniform. Draw a diagram to represent it.

Answer 2 The uniform magnetic field is represented by parallel, equidistant lines of equal length as shown in Figure. 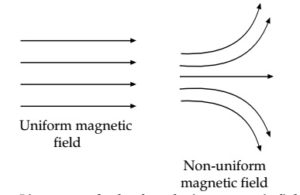 Question 1. Which of the following property of a proton can change while it moves freely in a magnetic field? (There may be more than one correct answer.)
(a) mass (b) speed (c) velocity (d) momentum

Question 2. In Activity 13.7, how do we think the displacement of rod AB will be affected if

(i) current in rod AB is increased;

and (iii) length of the rod AB is increased? 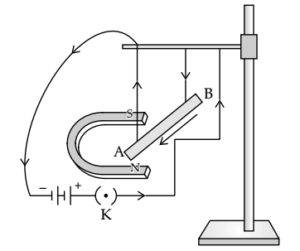 (i) If current in rod AB is increased, the displacement will also increase.

(ii) If we use a stronger horse-shoe magnet then the displacement of rod AB will increase.

(iii) lf length of the rod is increased, force acting on it will increase and, hence, displacement of the rod increases.

In accordance with Fleming’s Left Hand Rule, the direction of magnetic field is vertically upward.

Answer 1 According to Fleming’s Left-Hand Rule, stretch the thumb, forefinger and middle finger of your left hand such that they are mutually perpendicular.

Question 2. What is the principle of an electric motor?

Answer 2 The principle of an electric motor is based on the magnetic effect of electric current.A current carrying loop experiences a force and rotates when placed in a magnetic field.

Question 3. What is the role of the split ring in an electric motor?

Answer 3 The split ring in the electric motor acts as a commutator. The commutator reverses the direction of current flowing through the coil after each half rotation of the coil. Due to this reversal of the current, the coil continues to rotate in the same direction.

Question 1. Explain different ways to induce current in a coil.

Answer 1 Different ways to induce current in a coil are as follows:

(i) If a magnetic field is changed around a coil then an induced current is set up in the coil. It can be done by taking a bar magnet and bringing it closer to the coil or taking it away from the coil.

(ii) If a coil is moved in a magnetic field, then again, an induced current is set up in the coil.

(iii) If a coil is rotated in a uniform magnetic field, it may also produce an induced current in the coil. 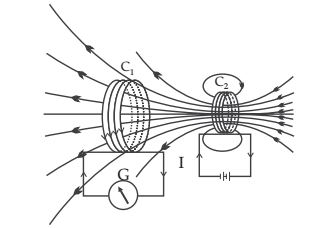 Question 1. State the principle of an electric generator.

Answer 1 An electric generator is based on the principle of electro-magnetic induction. When a rectangular coil is rotated in a uniform magnetic field, an induced voltage is generated between the ends of the coil.

Answer 2 Some sources of direct current are a cell, a battery and a D.C. generator.

Question 4. Choose the correct option.
A rectangular coil of copper wires is rotated in a magnetic field. The direction of the induced current changes once in each
(a) two revolutions (b) one revolution (c) half revolution (d) one-fourth revolution

When a rectangular coil of copper wire is rotated in a magnetic field, the direction of the induced current changes once in each half revolution.

(i) Use of Earth wire and proper Earthing.

(ii) Use of fuse (now-a-days fuse wire is replaced by MCB).

Question 2. An electric oven of 2 kW power rating is operated in a domestic electric circuit (220 V) that has a current rating of 5 A. What result do you expect? Explain.

Question 3. What precaution should be taken to avoid the overloading of domestic electric circuits?

Answer 3 The precautions that should be taken to avoid the overloading of domestic circuits are as follows:

(i) Too many appliances should not be connected to a single socket.

(ii) Too many appliances should not be used at the same time.

(iii) Faulty appliances should not be connected in the circuit.

(iv) Fuse should be connected in the circuit.

Question 2. The phenomenon of electromagnetic induction is
(a) the process of charging a body.
(b) the process of generating magnetic field due to a current passing
through a coil.
(c) producing induced current in a coil due to relative motion between a
magnet and the coil.
(d) the process of rotating a coil of an electric motor.

In electro-magnetic induction phenomenon, an induced current begins to flow in a coil whenever there is change in magnetic field in and around a coil.

Question 3. The device used for producing electric current is called a
(a) generator.
(b) galvanometer.
(c) ammeter.
(d) motor.

An A.C. generator is the device used for producing an electric current.

Question 5. At the time of short circuit, the current in the circuit
(a) reduces substantially.
(b) does not change.
(c) increases heavily.
(d) vary continuously.

At the time of short circuiting the live wire and the neutral wire come into direct contact. As a result, the current in the circuit abruptly increases.

Question 6. State whether the following statements are true or false.
(a) An electric motor converts mechanical energy into electrical energy.
(b) An electric generator works on the principle of electromagnetic induction.
(c) The field at the centre of a long circular coil carrying current will be parallel straight lines.
(d) A wire with a green insulation is usually the live wire of an electric supply.

(b) True: An electric generator works on the principle of electro-magnetic induction.

(c) True: The field at the centre of a long circular coil carrying current will be parallel straight lines.

Answer 7 Two methods of producing magnetic fields are as follows:

2) A very good method to produce magnetic field is due to flow of current in a solenoid.

Question 8. How does a solenoid behave like a magnet? Can you determine the north and south poles of a current–carrying solenoid with the help of a bar magnet? Explain. 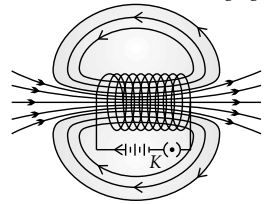 Question 9. When is the force experienced by a current–carrying conductor placed in a magnetic field largest?

Answer 9 The force experienced by a current-carrying conductor is largest when the directions of magnetic field and electric current are perpendicular to each other.

Question 10. Imagine that you are sitting in a chamber with your back to one wall. An electron beam, moving horizontally from back wall towards the front wall, is deflected by a strong magnetic field to your right side. What is the direction of magnetic field?

Hence, using Flemings Left Hand Rule, it can be concluded that the direction of magnetic field inside the chamber is downward.

Question 12. Name some devices in which electric motors are used.

Answer 12 Electric motors are used in all such devices where we want to convert electrical energy into mechanical energy so as to drive that machine.

Answer 13 A current induces in a solenoid if a bar magnet is moved relative to it. This is the principle of electromagnetic induction.

(i) When a bar magnet is pushed into a coil of insulated copper wire, a current is induced momentarily in the coil. As a result, the needle of the galvanometer deflects momentarily in a particular direction.

(iii) When a bar magnet is held stationary inside the coil, no current will be induced in the coil. Hence, galvanometer will show no deflection.

Question 14. Two circular coils A and B are placed closed to each other. If the current in the coil A is changed, will some current be induced in the coil B? Give reason.

Answer 15 The rules to determine the direction are:

Question 16. Explain the underlying principle and working of an electric generator by drawing a labelled diagram. What is the function of brushes?

Answer 16 An electric generator works on the principle of electro-magnetic induction phenomenon. According to it, whenever a coil is rotated between the poles of a magnet, an induced current is set up in the coil, whose direction is given by Fleming’s right-hand rule. 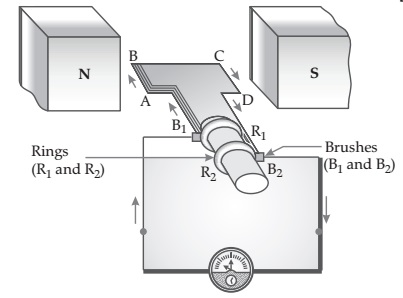 Working: When the axle attached to the two rings is rotated such that the arm AB moves up (and the arm CD moves down) in the magnetic field produced by the permanent magnet. The coil ABCD is rotated clockwise in the arrangement.

Function of brushes: A brush is a device which conducts current between stationary wires and moving parts, most commonly in a rotating shaft. A carbon brush is a sliding contact used to transmit electrical current from a static to a rotating part in a motor or generator, and, as regards DC machines, ensuring a spark-free commutation.

Question 17. When does an electric short circuit occur?

Answer 17 A common type of short circuit occurs when the positive and negative terminals of a battery are connected with a low-resistance conductor, like a wire. With a low resistance in the connection, a high current will flow, causing the delivery of a large amount of energy in a short period of time.

Question 18. What is the function of an earth wire? Why is it necessary to earth metallic appliances?

Answer 18 The metallic body of electric appliances is connected to the Earth by means of earth wire so that any leakage of electric current is transferred to the ground.

This prevents any electric shock to the user. That is why Earthing of the electrical appliances is necessary.