You are here: Home / NCERT Solutions / Class 10 / Science / Chapter 11 The Human Eye and the Colourful World

Question 1. What is meant by power of accommodation of the eye?

This ability is called the power of accommodation of the eyes.

Question 2. A person with a myopic eye cannot see objects beyond 1.2 m distinctly. What should be the type of the corrective lens used to restore proper vision?

To correct this defect of vision, he must use a concave lens. The concave lens will bring the image back to the retina as shown in the given figure. 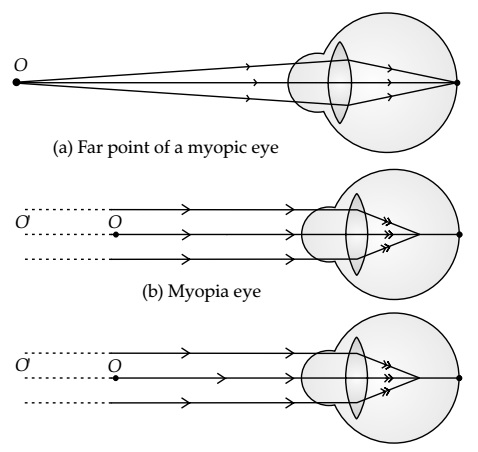 Question 3. What is the far point and near point of the human eye with normal vision?

Question 4. A student has difficulty reading the blackboard while sitting in the last row. What could be the defect the child is suffering from? How can it be corrected?

Answer 4 The student has difficulty in reading the blackboard while sitting in the last row. It shows that he is unable to see distant objects clearly. He is suffering from myopia. This defect can be corrected by using a concave lens.

Question 1. The human eye can focus on objects at different distances by adjusting the focal length of the eye lens. This is due to
(a) presbyopia.
(b) accommodation.
(c) near-sightedness.
(d) far-sightedness.

Human eye can change the focal length of the eye lens to see the objects situated at various distances from the eye. This is possible due to the power of accommodation of the eye lens.

The human eye forms the image of an object at its retina.

The least distance of distinct vision is the minimum distance of an object to see clear and distinct image. It is 25 cm for a young adult with normal visions.

Question 4. The change in focal length of an eye lens is caused by the action of the
(a) pupil. (b) retina. (c) ciliary muscles. (d) iris.

(ii) Power of near vision is measured relative to the main part of the lens. So, focal length of required lens,

Question 6. The far point of a myopic person is 80 cm in front of the eye. What is the nature and power of the lens required to correct the problem?

Answer 6 The person is suffering from an eye defect called myopia. In this defect, the image is formed in front of the retina. Hence, a concave lens is used to correct this defect of vision.

According to the lens formula,

We know that, Power,

A concave lens of power −1.25 D is required by the person to correct the defect.

Answer 7 A person suffering from hypermetropia can see distinct objects clearly but faces difficulty in seeing nearby objects clearly. It happens because the eye lens focuses the incoming divergent rays beyond the retina. This defect of vision is corrected by using a convex lens.

A convex lens of suitable power converges the incoming light in such a way that the image is formed on the retina, as shown in the following figure. 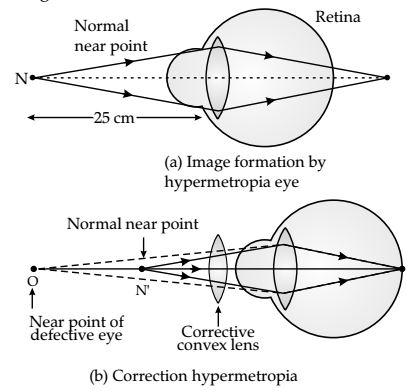 The convex lens actually creates a virtual image of a nearby object at the near point of vision (N) of the person suffering from hypermetropia.

The given person will be able to clearly see the object kept at 25 cm (near point of the normal eye), if the image of the object is formed at his near point, which is given as 1 m.

A convex lens of power +3.0 D is required to correct the defect.

Question 8. Why is a normal eye not able to see clearly the objects placed closer than 25 cm?

Answer 8 This is because the ciliary muscles of eyes are unable to contract beyond a certain limit. If the object is placed at a distance less than 25 cm from the eye, then the object appears blurred because light rays coming from the object meet beyond the retina.

Question 9. What happens to the image distance in the eye when we increase the distance of an object from the eye?

Question 10. Why do stars twinkle?

Answer 10 Stars emit their own light and they twinkle due to the atmospheric refraction of light. Stars are very far away from the earth. Hence, they are considered as point sources of light. When the light coming from stars enters the earth’s atmosphere, it gets refracted at different levels because of the variation in the air density at different levels of the atmosphere. When the star light refracted by the atmosphere comes more towards us, it appears brighter than when it comes less towards us. Therefore, it appears as if the stars are twinkling at night.

Question 11. Explain why the planets do not twinkle.

Answer 11 Planets do not emit light. However, they become visible due to reflection of light falling on them. They do not twinkle because they appear larger in size than the stars as they are relatively closer to earth.

Planets can be considered as a collection of a large number of point-size sources of light. The different parts of these planets produce either brighter or dimmer effect in such a way that the average of

brighter and dimmer effect is zero. Hence, the twinkling effects of the planets are nullified and they do not twinkle.

Question 12. Why does the Sun appear reddish early in the morning?

Answer 12 During sunrise, the light rays coming from the Sun have to travel a greater distance in the earth’s atmosphere before reaching our eyes. In this journey, the shorter wavelengths of lights are scattered out and only longer wavelengths are able to reach our eyes.

Question 13. Why does the sky appear dark instead of blue to an astronaut?

Answer 13 The sky appears dark instead of blue to an astronaut because there is no atmosphere in the outer space that can scatter the sunlight.

As the sunlight is not scattered, no scattered light reaches the eyes of the astronauts and the sky appears black to them.