Answer 1 Political parties perform the following functions in a democracy:

(i) Parties contest elections: In most of democratic countries, elections are fought mainly among the candidates put up by the political parties. Parties select their candidates in different ways. In India, top party leaders choose candidates for contesting elections.

(ii) Parties put forward different policies and programmes: Each one of us may have different opinions and views on what policies are suitable for the society. In democracy large number of similar opinions has to be grouped together to provide a direction in which policies can be formulated by the government. This is what the parties do. A party reduces a vast multitude of opinions into a few basic positions which it supports. The government is expected to base its policies on the line taken by the ruling party.

(iii) Parties make laws for the country: Though laws are passed by the legislature but since most of the members belong to a party, they go by the direction of party leadership, irrespective of their personal opinions.

(iv) Parties form and run government: Political parties recruit leaders, train them and make them ministers to run the government in the way they want.

(vi) Parties shape public opinion: They shape public opinion by raising and highlighting issues. They do these through pressure groups, which are the extensions of political parties and also launch movements for resolutions of problems faced by the people.

(vii) Parties provide people access to government welfare schemes: For an ordinary citizen it is easier to approach a local party leader than a government officer. They feel close to party even if they do not fully trust them. Even parties have to be responsive to the people’s needs and demands otherwise people can reject parties in the next elections.

Question 2. What are the various challenges faced by political parties?

(i) Lack of internal democracy within parties: There is a tendency in political parties towards concentration of power in one or a few leaders at the top. Parties do not keep membership registers, do not hold organisational meetings and conduct internal elections regularly. Ordinary members do not get sufficient information on what happens inside the party. Leaders make maximum decisions in the name of party.

(ii) Dynastic succession: Very few ordinary workers get chance to rise to the top in the party as parties do not practice open and transparent procedures. In many parties top positions are always controlled by members of one family. This is unfair to others and bad for democracy.

(iii) Growing role of money and muscle power: Since parties are focused only on winning elections, they tend to use short-cuts to win elections. They tend to nominate candidates, who have or can raise money. Rich people and companies who give funds to the parties tend to have influence on the policy decisions of the parties. In some cases, parties support criminals who can win elections.

(iv) Parties do not seem to offer a meaningful choice to the voters: In the recent years there has been a decline in the ideological differences among parties in most parts of the world. So people have no choices. Sometimes people cannot even elect very different leaders either, because the same set of leaders keeps shifting from one party to another.

Question 3 Suggest some reforms to strengthen parties so that they perform their functions well.

Answer 3 Some reforms which can strengthen political parties are:

(i) A law should be established to regulate the internal affairs of parties, thereby making them more transparent.

(ii) It should be made compulsory for political parties to maintain a register of its members, to follow its own constitution, to have an independent authority, to act as a judge in case of disputes, to hold open elections in case of disputes.

(iii) It should be made mandatory for the political parties to give a minimum number of tickets, about one-third, to women candidates.

(iv) The state should fund election campaigns, thereby eliminating lobbying groups and unfair competition. The government should give parties money to support their election expenses such as petrol, paper, telephone etc. or it could be given in cash on the basis of votes secured by a party in the last elections.

(v) People can put pressure on political parties and this can be done through petitions, publicity and agitations. Ordinary citizens, pressure groups and movements and media can play an important role in this. If political parties feel that they would lose public support by not taking up reforms they will become more serious about reforms. The quality of democracy depends upon the degree of participation. It is difficult to reform politics if ordinary citizens do not take part in politics and simply criticise it from outside.

Question 4. What is a political party?

Answer 4  A political party is a group of people who aim to attain power in the government through the elections. In other words, it is a group of people with similar policies and programmes, who come together to contest elections and hold power in the government. Political parties have their own ideology and vision for the society. They formulate various policies and programmes for the society. They work for the collective public interest. They agree on some programmes and policies for the society with a view to promote collective good.

Question 5. What are the characteristics of a political party?

Answer 5 Characteristics of a political party are:

(i) Every party has a certain structure. The group of people is organised in a proper way. Every member is aware of his role and responsibilities in the party.

(ii) All the members agree on some policies and programmes for the society with a view to promote the collective good. They seek to implement these policies by winning popular support through elections.

(iii) Political parties reflect fundamental political divisions in a society. Parties are about a part of the society and thus involve partnership.

Question 6. A group of people who come together to contest elections and hold power in the government is called a ……….

Question 7. Match List I (organisations and struggles) with List II and select the correct answer using the codes given below the lists: 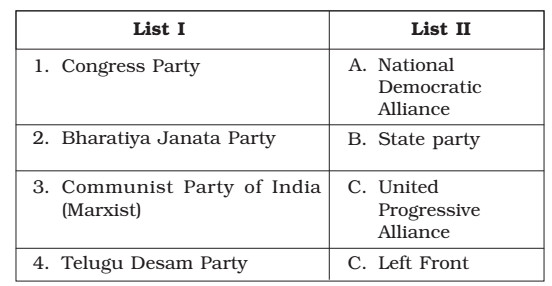 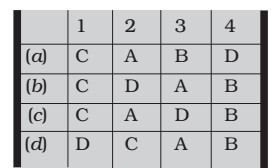 Question 8. Who among the following is the founder of the Bahujan Samaj Party?

Question 9. What is the guiding philosophy of the Bharatiya Janata Party?

A. Political parties do not enjoy much trust among the people.

C. Parties are not necessary to run governments.

Question 11. Read the following passage and answer the questions given below: Muhammad Yunus is a famous economist of Bangladesh. He received several international honours for his efforts to promote economic and social development for the benefit of the poor. He and the Grameen Bank he started, jointly received the Noble Peace Prize for 2006. In February 2007, he decided to launch a political party and contest in the parliamentary elections. His objective was to foster proper leadership, good governance and build a new Bangladesh. He felt that only a political party different from the traditional ones would bring about new political culture. His party would be democratic from the grassroots level. The launching of the new party, called Nagarik Shakti (Citizens’ Power), has caused a stir among the Bangladeshis. While many welcomed his decisions, some did not like it. “Now I think Bangladesh will have a chance to choose between good and bad and eventually have a good government,” said Shahedul Islam, a government official. “That government, we hope, would not only keep itself away from corruption but also make fighting corruption and black money a top priority.” But leaders of traditional political parties who dominated the country’s politics for decades were apprehensive. “There was no debate (over him) winning the Nobel, but politics is different—very challenging and often controversial,” said a senior leader of the Bangladesh Nationalist Party. Some others were highly critical. They asked why he was rushing into politics. “Is he being planted in politics by mentors from outside the country,” asked one political observer. Do you think Yunus made a right decision to float a new political party? Do you agree with the statements and fears expressed by various people? How do you want this new party organised to make it different from other parties? If you were the one to begin this political party how would you defend it?

Answer 11. Yunus made a right decision to launch a political party and contest in the parliamentary elections. It’s a human tendency when a competitor comes in front of anybody, people look for excuses to quit the person out of the field. When there are more than one parties in the country people have a choice to make between good and bad. The new party should promote proper leadership, good governance and should be capable of bringing about new healthy political culture. Last but not least it should be democratic from the grassroots level.