Question 1. What are the different forms of power sharing in modern democracies? Give an example of each of these.

(i) Horizontal division of power: Power is shared among different organs of government, such as the legislature, executive and judiciary. This ensures that none of the organs can exercise unlimited power. Each organ checks the others and thus balance of power among various institutions is maintained. Ministers and government officials are responsible to the Parliament or State Assemblies. Similarly, judges though appointed by the executive, keep a check on the functioning of executive or laws made by the legislatures. This arrangement is called a system of checks and balances.

(iii) Division of power among social groups: The countries having community government shares the power among different social groups, such as the religious and linguistic groups. We can best cite the example of Belgium in this regard. This method is used to give minority communities a fair share in power.

(iv) Division of power among political parties, pressure groups and movements: Political parties, pressure groups and movements help in controlling or influencing those who are in power. In a democracy, citizens have the freedom to choose among the various contenders for power. Such a freedom of choice entails competition among the different parties. Such competition ensures that power does not remain in one hand, but is shared among different political parties representing different ideologies and social groups. Sometimes this kind of sharing can be direct, when two or more parties form an alliance to contest elections. If their alliance group is elected, they form a coalition government and thus share power. Various interest groups such as those of traders, businessmen, industrialists, farmers and industrial workers have a share in governmental power, either through participation in governmental committees or bringing influence on the decision making process.

Question 2. State one prudential reason and one moral reason for power sharing with an example from the Indian context.

(ii) Moral reason: Power sharing is the essence of democracy. People have a right to be consulted on how they are to be governed. For example, the division of power among different units in India is a suitable example of moral reason for power sharing.

Question 3. After reading this chapter, three students drew different conclusions. Which of these do you agree with and why? Give your reasons in about 50 words.

Thomman: Power sharing is necessary only in societies which have religious, linguistic or ethnic divisions.

Mathayi: Power sharing is suitable only for big countries that have regional divisions.

Ouseph: Every society needs some form of power sharing even if it is small or does not have social divisions.

Answer 3  Ouseph’s statement is the most logical and I agree to it as power sharing reduces the possibility of conflict between social groups and strengthens the unity of the nation. It upholds the spirit of democracy.

Question 4. The Mayor of Merchtem, a town near Brussels in Belgium, has defended a ban on speaking French in the town’s schools. He said that the ban would help all non-Dutch speakers integrate in this Flemish town. Do you think that this measure is in keeping with the spirit of Belgium’s power sharing arrangements? Give your reasons in about 50 words.

Answer 4 . This measure is not in keeping with Belgium’s power sharing arrangements. The arrangements seek to maintain peace between the French-speaking and Dutch-speaking communities. By putting a ban on speaking French, the Mayor will cause civil unrest. Both the languages should be made acceptable in the town’s schools. This bilingual education system will be a better way to integrate the people of the town.

Question 5. Read the following passage and pick out any one of the prudential reasons for power sharing offered in this. “We need to give more power to the panchayats to realise the dream of Mahatma Gandhi and the hopes of the makers of our Constitution. Panchayati Raj establishes true democracy. It restores power to the only place where power belongs in a democracy—in the hands of the people. Giving power to Panchayats is also a way to reduce corruption and increase administrative efficiency. When people participate in the planning and implementation of developmental schemes, they would naturally exercise greater control over these schemes. This would eliminate the corrupt middlemen. Thus, Panchayati Raj will strengthen the foundations of our democracy.”

Answer 5 . When people participate in the planning and implementation of developmental schemes, they would naturally exercise greater control over these schemes. This would eliminate the corrupt middlemen.

A. reduces conflict among different communities

B. decreases the possibility of arbitrariness

G. undermines the unity of a country

A. In Belgium, the Dutch-speaking majority people tried to impose their domination on the minority French-speaking community.

B. In Sri Lanka, the policies of the government sought to ensure the dominance of the Sinhala-speaking majority.

C. The Tamils in Sri Lanka demanded a federal arrangement of power sharing to protect their culture, language and equality of opportunity in education and jobs.

D. The transformation of Belgium from unitary government to a federal one prevented a possible division of the country on linguistic lines.

Question 8: Match list I (forms of power sharing) with List II (forms of government) and select the
correct answer using the codes given below in the lists: 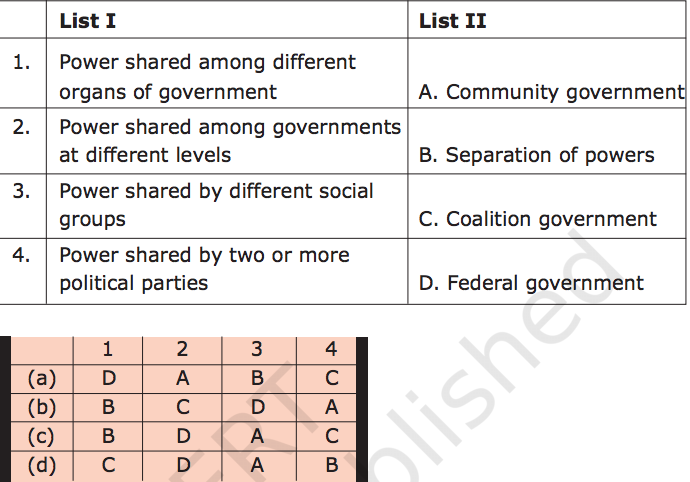 Question 9. Consider the following two statements on power sharing and select the answer using the codes given below:

A. Power sharing is good for democracy.

B. It helps to reduce the possibility of conflict between social groups.

Which of these statements are true and false?