Question 1 Development of a country can generally be determined by

(i) its per capita income

(iii) health status of its people

Answer 1 (i) its per capita income

Question 2 Which of the following neighbouring countries has better performance in terms of human development than India?

Question 4. What is the main criterion used by the World Bank in classifying different countries? What are the limitations of this criterion, if any?

(i) It does not tell us about how this average income is distributed among the people in the individual countries.

(ii) Two countries with the same per capita income might be very different with regard to income distribution. One might have equitable distribution of income while the other might have great disparities between the rich and the poor.

Question 5 In what respects is the criterion used by the UNDP for measuring development different from the one used by the World Bank?

Answer 5  The criterion used by the UNDP for measuring development is different from the one used by the World Bank in the sense that it uses a combination of factors such as health, education and income as indicators of development. It does not rely solely on per capita income, as is the case with the World Bank. According to the HDR, health and education are the indicators of the development besides food, clothes and shelter. Thus, HDR compares countries on the basis of educational levels of the people, their health status and per capita income.

Question 6 Why do we use averages? Are there any limitations to their use? Illustrate with your own examples related to development.

Answer 6 Since countries have different populations, comparing total income does not tell us what an average person is likely to earn. Hence; we compare the average income which is the total income of the country divided by its total population. We use averages because they are useful for comparing differing quantities of the same category. For example, to compute the per capita income of a country, averages have to be used because there are differences in the incomes of diverse people.

Limitations of use of averages:

(i) Although ‘averages’ are useful for comparison, they hide disparities. For example, there may be two countries A and B, where the monthly incomes may be the same. In country A, most of the people have higher incomes, but in country B, a few people are extremely rich with high income while most of the  people are extremely poor with very less income. So, everybody would like to live in country ‘A’ because it has more equitable distribution while in country ‘B’ there is much difference between the income of the rich and the poor.

(ii) Even though they are useful for comparison, they may also hide disparities. For example, the infant mortality rate of a country does not differentiate between the male and female infants born in that country. Such an average tells us nothing about whether the numbers of children dying before the age of one are mostly boys or girls.

Question 7 Kerala, with lower per capita income has a better human development ranking than Punjab. Hence, per capita income is not a useful criterion at all and should not be used to compare states. Do you agree? Discuss.

Question 8. Find out the present sources of energy that are used by the people in India. What could be the other possibilities fifty years from now?

Answer 8  The present sources of energy that are used by the people of India are electricity, coal, crude oil, cow dung and solar energy. Other possibilities fifty years from now could include ethanol, bio-diesel, nuclear energy and a better utilisation of wind energy.

Question 9. Why is the issue of sustainability important for development?

Answer 9 . Sustainability of development means that development which is not only for the present times but is also for the future generations. Sustainability is the capacity to use the resources judiciously and maintain the ecological balance. Every generation wants to get the maximum benefits from the available resources but such a thing would be quite disastrous because the available resources shall be exhausted within a short time and the future generations will be deprived of these resources.

The issue of sustainability is important for development because of the following reasons:

(i) Development must be in relation with the future.

(ii) If natural resources are not sustained, then development will stagnate after a point of time.

(iii) Exploiting resources unethically will ultimately undo the development that a country has achieved. This is because in the future, those resources will not be available for further progress.

Question 10. ‘‘The Earth has enough resources to meet the needs of all but not enough to satisfy the greed of even one person.” How is this statement relevant to the discussion of development? Discuss.

Answer 10 This means that there are enough resources to meet the needs of all if they are used judiciously and not over exploited by a few, and depriving the others who need them. Resources that are replenished by nature are known as renewable resources.

Question 11 List a few examples of environmental degradation that you may have observed around you.

Question 12 For each of the items given in the table below, find out which country is at the top and which is at the bottom. 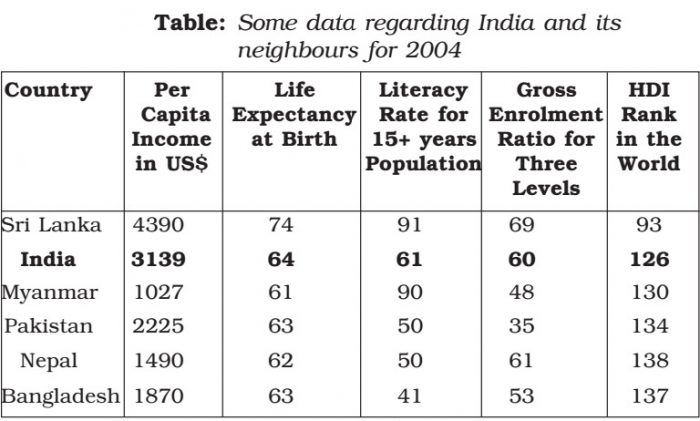 Answer 12 (i) Per Capita Income in US$: Top country—Sri Lanka; Bottom country—Myanmar.

Question 13. The following table shows the proportion of undernourished adults in India. It is based on a survey of various states for the year 2001. Look at the table and answer the following questions.

(i) Compare the nutritional level of people in Kerala and Madhya Pradesh.

(ii) Can you guess why around 40 per cent of people in the country are undernourished even though it is argued that there is enough food in the country?

Describe in your own words.

(ii) Despite the presence of adequate food in the country, around 40% of Indians are undernourished. This is because of the erratic and unsystematic distribution of food. Some states in the country ensure smooth running of ration shops and other forms of Public Distribution System (PDS). The supply of essential commodities to the people through government agencies is known as Public Distribution System. It benefits the weaker sections of the society. The ration shops under the PDS system help the population maintain the nutritional status of the people by making food available. However, on account of excess exports and inconsistent food supply to the masses, nearly 40% of the Indian people are undernourished.