Question 2 What is sewage? Explain why it is harmful to discharge untreated sewage into rivers or seas.

Answer Sewage is a liquid waste which has water along with various types of impurities from houses, offices, factories, hospitals.The sewage (or wastewater) released by houses and other buildings contains a large number of harmful substances and disease-causing micro-organisms. If this untreated sewage is discharged into rivers, lakes or ground, it will contaminate our freshwater sources (like rivers, lakes and groundwater). Drinking of water contaminated with sewage will spread diseases in people which can even lead to deaths. The discharge of untreated sewage into rivers (and sea) can also kill fish and other aquatic animals. Untreated sewage should not be allowed to run into rivers, lakes, sea or underground. Sewage water should be treated suitably (or processed) before releasing it back to the environment.

Question 3 Why should oils and fats be not released in the drain? Explain.

Question 4 Describe the steps involved in getting clarified water from wastewater.

2) Then water is then taken to grit and sand removal tank where impurities like sand, grit and pebbles are removed by sedimentation.

3) Solid impurities and feaces etc. are collected from bottom of water and are removed by a scraper.A skimmer removes the floatable solid oil and grease.Water is so clear that it is called clarified water.Sludge is used to produce biogas.

4) Clarified water is the passed through an aerator tank where air is pumped into water.It helps aerobic bacteria to grow which decompose organic matter like human waste.

5) After few hours, the suspended microbes settle at the bottom of the tank as activated sludge.The water is then removed from the top.The dried sludge is used as a manure.

6) Water is removed from the top and and is stored in a tank.

Question 5 What is sludge? Explain how it is treated.

Answer Sludge is the solid waste from the wastewater during the treatment in water treatment plant.It is collected by a scrapper.It is transferred to a separate tank where it is decomposed by anaerobic bacteria.After the aerator tank , microbes and human waste settle down and form activated sludge.It contains 97% water.The water is removed by sand drying beds.Dried sludge is used as a manure.

Answer Chlorine and ozone are used to disinfect water.

Question 8 Explain the function of bar screens in a wastewater treatment plant.

Answer Large size waste like napkins, plastics packets, cans etc. are removed from the wastewater through the bar screens.

Question 9 Explain the relationship between sanitation and disease.

Answer Sanitation and disease are related to each other. A large number of diseases are caused by poor sanitation and contaminated drinking water.Poor sanitation leads to growth of harmful microbes which are a source of spreading diseases.If sanitation is there, no disease will occur.

Question 10 Outline your role as an active citizen in relation to sanitation.

1) We should make people aware of the benefits of sanitation.

3) Oil and fats should not be thrown in drains.

4) Chemicals like paints, insecticides etc should not be thrown in drain which may kill useful bacteria. 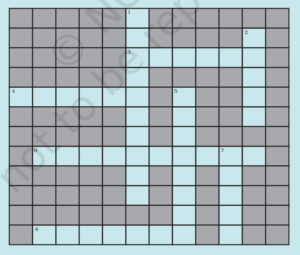 Down
1. Used water
2. A pipe carrying sewage
5. Micro-organisms which causes cholera
7. A chemical to disinfect water 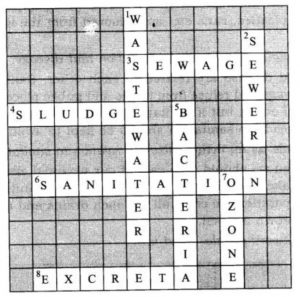 Question 12 Study the following statements about ozone:
(a) It is essential for breathing of living organisms.
(b) It is used to disinfect water.
(c) It absorbs ultraviolet rays.
(d) Its proportion in air is about 3%. Which of these statements are correct?