Question 1 What is the composition of natural gas?

Question 2 How is natural gas formed?

Question 4 Why natural gas is considered to be a good fuel?

Question 6 What are the disadvantages of burning fossil fuels?

Question 7 What steps should be taken to control pollution caused by burning of fossil fuels?

Natural gas burns easily and produces a lot of heat. Natural gas contains up to 95% methane, the remaining being ethane and propane.

Natural gas occurs deep under the crust of the earth either alone or along with oil above the petroleum deposits. Natural gas is formed under the earth by the decomposition of vegetable matter lying under water. This decomposition is carried out by anaerobic bacteria in the absence of oxygen.

(1) Natural gas is used as a Domestic and Industrial fuel

Natural gas burns readily to produce a lot of heat. So, in many areas natural gas is used as the main fuel for domestic and industrial heating purposes.

(2) As a fuel in Thermal Plants

Natural gas is used as a fuel in thermal power plants for generating electricity.

It is being used increasingly as a fuel in transport vehicles (like cars, buses and trucks). It is a good alternative to petrol and diesel because it does not cause any air pollution.

(1) Natural gas being a complete fuel in itself can be used directly for heating purposes in homes and industries.

(2) Natural gas is a good fuel because it has a high calorific value.Moreover, natural gas burns with a smokeless flame and causes no air pollution. It also does not produce any poisonous gases on burning Natural gas is, therefore, an environment friendly fuel as compared to other fossil fuels.

(3) It can be supplied directly from the gas wells to the homes and factories for burning through a net-work of underground pipelines, and this eliminates the need for additional storage and transport. 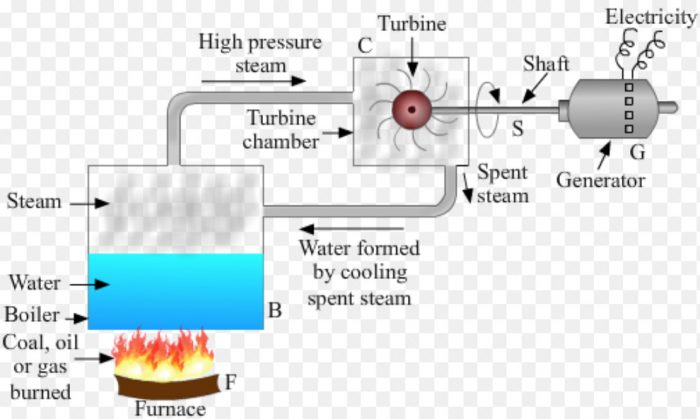 An installation where electricity (or electrical power) is generated is called a power plant. A power plant in which the heat required to make steam to drive turbines (to make electricity) is obtained by burning fuels (coal, oil or gas) is called thermal power plant.

Coal (fuel oil or natural gas) is burned in a furnace F to produce heat . This heat boils the water in a boiler B to form steam. The steam formed from the boiling water builds up a pressure. The hot steam at high pressure is introduced into a turbine chamber C having a steam turbine T. The steam passes over the blades of the turbine as a high pressure jet making the turbine rotate . The shaft S of turbine is connected to a generator G. When the turbine rotates, its shaft also rotates and drives the generator. The generator produces electricity. The spent steam coming out of turbine chamber is cooled. On cooling, steam condenses to form water. This water is again sent to the boiler to form fresh steam. This is repeated again and again.

It is easier to transmit electricity over long distances than to carry coal (oil or gas) over the same distance, therefore, many thermal power plants are established near coal fields (or oil fields). We produce a major part of our electricity by burning fossil fuels. Due to this, large amounts of fossil fuels (coal, oil and gas) are being burnt everyday at thermal power plants to generate electricity. Because our supplies of coal, oil and gas are running out at a rapid rate, and because of the pollution caused by burning fossil fuels, other ways of generating electricity must be found.

The main disadvantage of using fossil fuels are:

(1) The burning of fossil fuels produces acidic gases such as sulphur dioxide and nitrogen oxides:

These acidic gases cause acid rain. The acid rain damages trees and plants (crops, etc., reduces fertility of soil by making it acidic, and poses a danger to aquatic life (like fish) by making the water of lakes and rivers acidic. Acid rain damages buildings by corroding them slowly. The monuments made of marble stone and statues are also damaged by acid rain. The burning of fossil fuels also puts a poisonous gas, carbon monoxide, into air

(2) The burning of fossil fuels produces large amount of carbon dioxide which goes into air:  The presence of increasing amounts of carbon dioxide gas in the atmosphere is causing increased greenhouse effect leading to excessive heating of the earth. This is harmful for all the life on earth.

(3) The burning of fossil fuels (especially coal) produces smoke which pollutes the air.

(4) The burning of coal leaves behind a lot of ash: It also puts tiny particles of ash (called fly-ash) into the air causing air pollution.

(1) The pollution of air caused by burning petroleum fuels (like petrol and diesel) in vehicles can be controlled by fitting the vehicles with catalytic converters . The catalytic converter is a device which changes the harmful gases coming from the engine of a car into harmless gases before releasing them into air.

(2) The pollution of air caused by burning coal in thermal power plants and factories can be controlled by washing down the smoke and acidic gases by water in a scrubber. Scrubbers are tanks where the smoke and waste gases produced by thermal power plants and factories, etc. are sprayed by jets of water before they reach the chimney. Water washes away soot ( carbon) present in smoke and dissolves most of the harmful acidic gases like sulphur dioxide and nitrogen oxides

(3) The pollution of air caused by burning coal in thermal power plants and factories can also be controlled by installing electrostatic precipitators in their chimneys. When an electrostatic precipitator is installed in the chimney, then the unburnt carbon particles and fly-ash particles present in smoke keep on depositing on the inner walls of the chimney and do not go into air. The deposit of carbon and fly-ash particles can be removed by sweeping the chimney from time to time.