You are here: Home / Class 10 / Heredity and Evolution / Structure of DNA

Question 1 Give important features of the double helical model of DNA proposed by Watson and Crick?

Question 2 What is a gene?

Question 4 Give examples where environmental factors govern the sex determination?

Question 7 What does a nucleotide consist of in a DNA molecule?

Question 8 Why is DNA called a polynucleotide?

Question 9 How many different bases are found in a DNA molecule? Which bases pair together?

Question 10 Where are the genes located?What is the chemical nature of gene?

DNA is deoxyribonucleic acid. It was first isolated by the scientist Frederick Meisher from the nucleus of the pus cells in 1869.

DNA is the carrier of the genetic information from generation to generation. It transmits the hereditary in a coded language from parents to the offsprings.DNA is a macromolecule or polymer. It is made of very large number of nucleotide units and hence is termed polynucleotide.

Each nucleotide unit in a DNA molecule is made up of three components:

(1) Deoxyribose sugar: It is a pentose sugar.

(2) Nitrogenous base: Each nucleotide unit has a nitrogen containing base. In a DNA molecule, nitrogenous bases are of two types:

(a) Purines: The purines in a DNA molecule are – Adenine (A) and Guanine (G)

(b) Pyrimidines: The pyrimidines in a DNA molecule are – Cytosine (C) and Thymine (T) 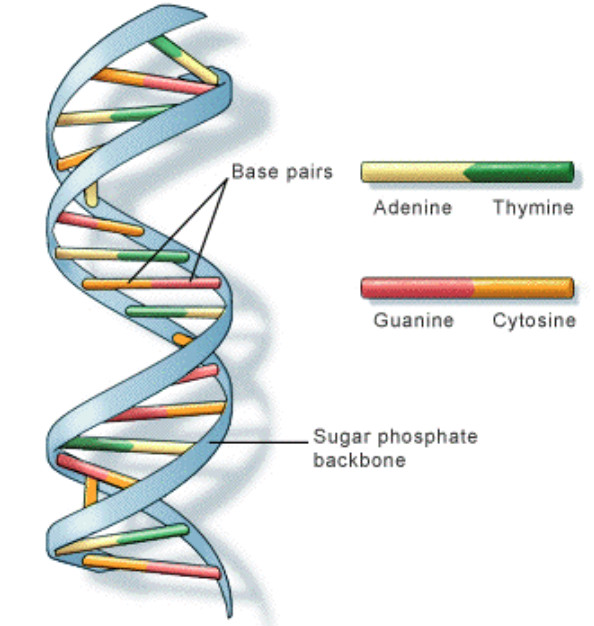 J.D. Watson and F.H.C. Crick proposed the double helical model of DNA in 1953.

The important features of the double helical model are:

(1) DNA molecule is made up of two long polynucleotide strands forming a double helical structure just like a spiral staircase. Each helical turn of the DNA molecule is 3-4 nm in length in which ten nucleotide base pairs are present.

(2) Deoxyribose sugar and phosphate molecules are joined alternately to form the backbone of each polynucleotide strand. The nitrogenous base of each nucleotide is attached to the sugar molecule and projected towards the interior of the double helix.

Mendel was the first scientist to visualise a gene as a unit of inheritance in 1866. He called it factor.

The word gene was, however, introduced by Johannsen in 1909.

Genes are segments of DNA on a chromosome occupying specific positions.

(1) Each gene has a specific sequence of nucleotides which determines its functional property.

(2) It is the genes which determine everything about us, say our appearance, our complexion, the shape and colour of our eyes, the shape of our nose and chin.

(3) Gene is a segment of DNA molecule which has coded information to form a particular protein in the cell. This protein can function either as a structural protein or as a functional protein (enzyme).

A gene is a hereditary unit, a segment of DNA having specific sequence of nucleotides that determines its specific biological function.It can maintain constancy from generation to generation but at times may also undergo sudden mutations (inheritable changes) to bring variations.

In sexual reproduction male and female gametes fuse during fertilization to form zygote. This zygote then develops into the offspring (male or female).

The mechanism by which the sex of an individual is determined as it begins life, is called sex determination.

In diploid organisms having separate sexes, a specific pair of chromosomes in each diploid cell determines the sex of the individual. They are called sex chromosomes. All other chromosomes are termed autosomes as these have genes which control the somatic (body) characters.

The sex of the child is determined at the time of fertilization when male and female gametes fuse to form zygote.

This mechanism of sex determination is called XX-XY mechanism.

In grasshoppers and some other insects, the male has only one sex chromosome (XO) whereas the female has two homomorphic (of same size and shape) sex chromosomes (XX). This type of sex determination mechanism is called XX-XO mechanism.

Two examples are cited below:

(1) First example is of a turtle . In this species, high incubation temperature results in development of female progeny.

(2) Second example is of a lizard. In this-species, high incubation temperature results in male progeny.