Question 1 How much work is done in moving a charge of 2 Coulombs, from a point at 118 Volts to a point at 128 Volts?

Question 3 What are the conditions under which charges can move in a conductor?

Question 4 How will you maintain a potential difference between the ends of a conductor?

Question 5 What is potential difference?

Consider a body on which some electric charge(say positive)is deposited. Such a body is known as positively charged body and process of adding electric charge on a body is called charging the body.

Electric potential is defined as work done on per unit charge.

The electric potential is said to be 1 volt if 1 joule work is done in moving 1 coulomb charge.

Electric potential is a scalar quantity. 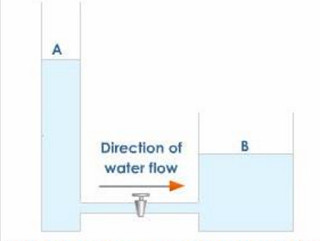 There is pressure difference between arm A and B.

If we open the valve then water flows from A to B due to pressure difference.

Flow of water continues till water level in both the arms become equal.

The electrons in a wire flow from one end to other of wire if there is electric potential difference between the ends of conductor.

The electric potential difference across the ends of a conductor is maintained by dry cell or battery.

The chemical reaction taking place in a cell makes on electrode of cell as positive and other electrode as negative.

Resistance of an ideal voltmeter is infinite.

Voltmeter is connected in parallel across a wire.

The electric potential difference is the cause of electric current.