Question 3 What are neurons?

Question 4 Explain the structure of neuron?

Question 5 What is the function of nervous system?

Question 6 What is synapses?

The change in environment to which organism respond and react is called stimuli.
The environmental factors such as heat,light,cold,touch,taste,smell,force of gravity etc act as a stimuli to induce response and reaction in living organism.

The working together of different organs of a body of an organism in a proper manner to produce proper reaction to a stimulus is called coordination.

For proper control and coordination there are 2 systems:
1)Nervous System
2)Endocrine system

Nerve cell or neurons are the structural and functional unit of nervous system. 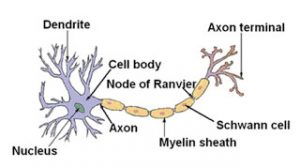 The neurons lie end-to-end in chains to transmit nerve impulses.Each neuron receives an impulse through its dendrites and passes it on the next neuron in the chain through axon via cell body.

There occurs a very minute gap between terminal portion of axon of one neuron and dendrite of other neuron. This gap is called synapse.The synapse act as a one-way valve to conduct impulse in one direction only.This is because a chemical substance called neurotransmitter is secreted only on one side of gap ie axon’s side.